On Valentine’s Day I got K a gift that got him teary-eyed — I got him six legs of duck confit. Even tied a red ribbon around a leg and made him play the “you’re getting warmer, you’re getting colder” game to find it in the freezer. He’s been wrestling with the best ways to make use of his duck confit ever since.

So when I came across a recipe from Top Chef winner Stephanie Izard for duck with miso-almond butter (click here for recipe), it seemed like we might be able to rock some duck confit. While the recipe calls for uncooked duck breasts, K agreed to substitute the pre-cooked duck confit legs and we were off and running.

Early in the day, I mixed up some garlic and miso paste with a little olive oil and rubbed it on the duck to marinate. When we got started cooking, K wiped off the marinade and got to work crisping up the duck in a hot skillet. 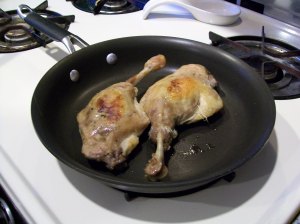 Meanwhile, I made the miso-almond butter by processing sweet Marcona almonds, water, a little honey, a touch of Sriracha (as a substitute for the sambal oelek), some olive oil and miso paste. It took awhile for the mixture to blend into a paste, but once I put it through a strainer we had a thick, but buttery almond-based sauce.

In the interest of adding some greenery, we also blanched then grilled some fresh asparagus. That was done about the time the duck was hot and golden, so it was time for a much-anticipated dinner.

The duck was soooooooo tender and full of buttery goodness. The miso-almond butter added to the luxurious mix with a sweet, salty, nutty wonderfulness. The asparagus was hearty and a nice, fresh foil to the meaty duck and indulgent nut butter. Despite originally being a recipe for duck breast, the duck confit slid effortlessly (and deliciously) into place here. Now, what to do with the remaining four confit legs???

Alterations: We used pre-made duck confit instead of uncooked duck breast, we used Sriracha sauce instead of sambal oelek.
Soundtrack: The Airborne Toxic Event live. Epically fantastic band.
Would we make this again: Yes. If you happen to have duck (of any kind, really) sitting around, you should too. It’s easy, but it feels really fancy and obscenely rich.