As Bravo has continued with its successful Top Chef franchises, they post fewer and fewer recipes. When we started this little hobby nearly five years ago, that would have been a problem since we were both fine in the kitchen, but not great. However, we have grown! Our palates have grown, our tastes have grown and our talents have grown. So I’ve actually enjoyed looking at Bravo’s photos of the finished dishes, remembering a chef’s process from the show and building the dish from scratch on our own — figuring it out and making it ours. 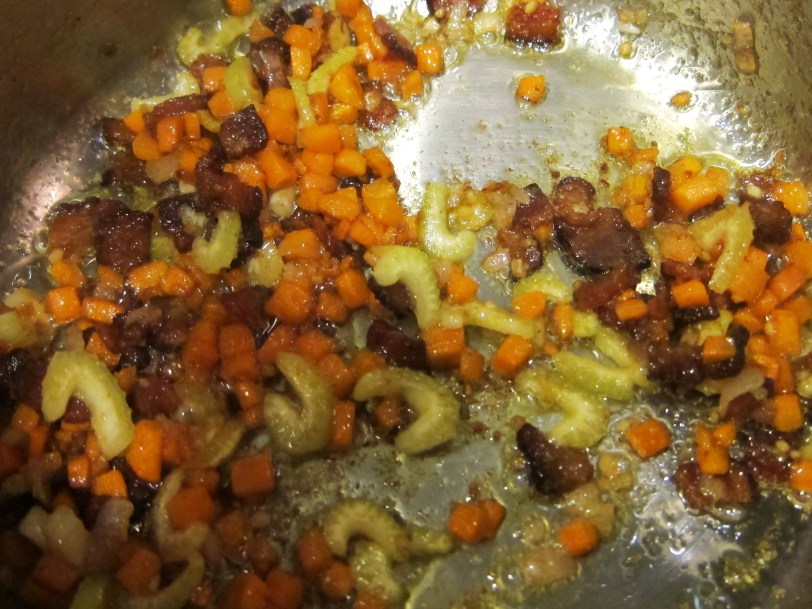 I have been told — mostly just as a note, but sometimes with concern — that I often look at things differently. I probably do, I’m kind of neutral on this one since it’s just the way my brain works and I just see things the way I see them. I don’t care much for structure imposed by other people and I’ve resisted it my entire life. It’s why I failed nearly every math class I ever took and it’s also why I work for myself. Sometimes, I can be a bossy control freak because my brain is telling me passionately that my way is the right way. Sometimes, I just give up and don’t care. Why won’t this electrical outlet work? I’ve tried four different things I looked up online and none of them made a difference. Eh … the outlet just doesn’t work, we won’t use it. 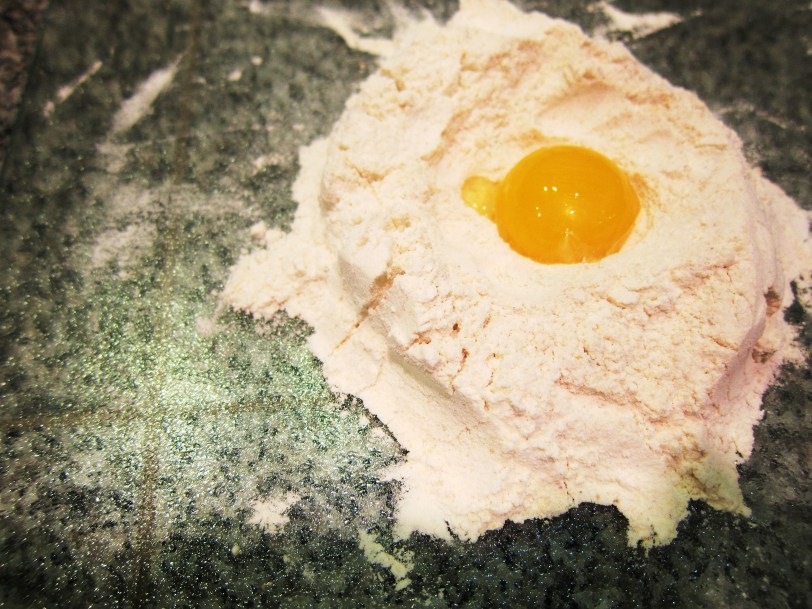 K, on the other hand, prefers things to be a bit more structured and would never in a million years let that outlet not work. Why the outlet doesn’t work will keep him up at night until he figures it out. We are both wildly creative people, but have very different approaches to creativity. It’s part of the reason we work. I’m sure it’s also part of the reason we frustrate each other from time to time (not much, though, because we’re awesome and try to appreciate different approaches instead of resisting or changing them — at least that’s what I tell myself). I think this is also the reason K has been a bit less enthusiastic about recent Top Chef Nights. If there are no recipes, how can we recreate the dishes?!? NO RECIPES, PEOPLE!!!

But, just as we have evolved and grown, this blog and, indeed, Top Chef Night together has evolved and grown. No longer are we simply trying to challenge ourselves to cook food created by the best of the best, we’re taking on the additional challenge of being inspired by them and creating riffs on their dishes that are our own. And still trying to make them home cook-friendly. Because we’re home cooks. Who just happen to have a sous vide machine. I know…I know… 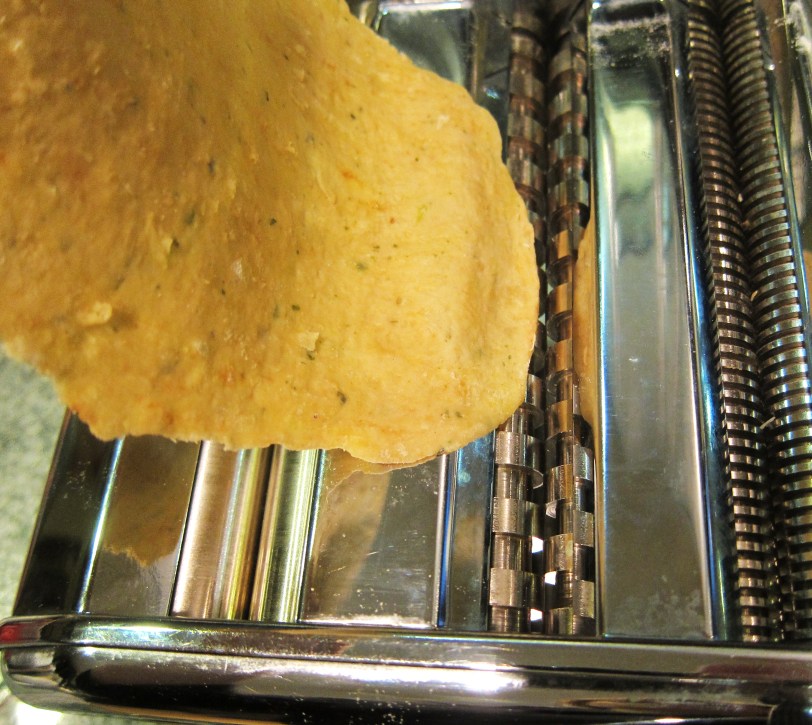 So, I look at the photos posted on the Bravo site and create recipes and ask K if he thinks certain flavors will work or what ingredients might be missing and I punt on amounts and we try to taste until it’s right. I know that many of these things exist in my head, but I also know that K (and you guys) don’t live in my head (be grateful) so I appreciate his desire to have them written in a more structured form. And that, you see, is why this works.

And recipes should be written down, preserved for posterity. They’re food memories. I still prod and cajole my grandmother to write down her recipe for Polish sweet Easter bread (platzek) and her unforgettable dinner rolls. We make our own favorite recipes to share with our family at Christmas dinner every year. They go from in our heads, to the table and straight to our hearts.

So, without further adieu, our take on Chef Bryan Voltaggio’s calamari bolognese with miso pasta. It was flippin’ delicious

To make the pasta: Dissolve the miso soup powder in the warm water. Set aside. On a cool surface (glass cutting board or granite counter works well), make a mound of flour, add salt and make a well in the middle. Crack the egg over a bowl and separate the yolk and the white. Put the egg yolk into the middle of the flour well. Use your hands to incorporate the egg into the flour. When incorporated, add the warm miso water slowly and incorporate with your hands. Add water and incorporate as needed until there’s no raw flour left, but the dough is no longer sticky. Let rest for 10 – 20 minutes. Run it through the flat roller on a pasta machine through the second to last thinness level — you want it thin, but not paper-thin. Cut it into fettuccine/pappardelle noodles and set aside on a pasta rack to let noodles dry slightly. Noodles can be made to this point, placed gently into “nests” and frozen to be made later.

To make the sauce: Set a few calamari rings aside and chop the remaining calamari into smaller pieces. Saute bacon. When bacon starts getting some color, add onion, celery, carrots, garlic and ginger until veggies are browned and bacon is crisped. Add sake and boil for one minute. Add stock and tomato paste, sesame oil and soy sauce. Stir and simmer for 8-10 minutes. Add the milk and sriracha.

While sauce is simmering, boil water for pasta. Add pasta to boiling water and cook until tender (approximately 3-4 minutes).

Heat canola oil in a saute pan (use enough oil to go about halfway up the side of the pan). Pour cold club soda over rice flour until a thick batter forms. Dip calamari rings into batter and fry in canola oil. Drain on paper towel and salt liberally to taste.

Add chopped calamari to simmering sauce and simmer for one minute. Remove from heat. 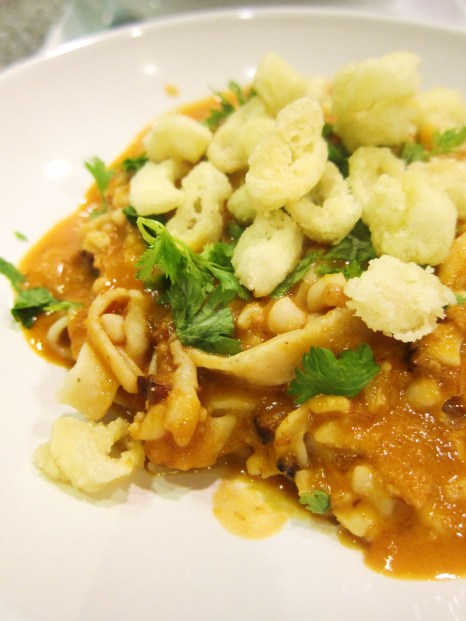