I am notoriously frugal. K once went shopping with me and I tried on a sleeveless shirt. He said he liked it, I told him I would only pay $45 for it if they agreed to include the sleeves. As a self-employed writer, my budget for items is often zero, so frugality is a necessity. K, on the other hand, loves many of the finer things in life, like wine. He adores wine, he learns about wine and he knows what he’s talking about. The words cheap … er, frugal, and *good* wine rarely go together. But we found a way to make that happen when we went to a Cameron Hughes wine event at the Edina, Minnesota Room and Board store. 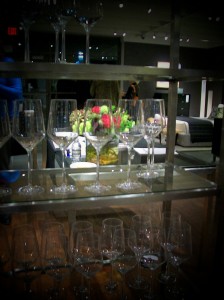 As soon as we entered the store, we were given a wine glass and invited to sample wines, cheeses, toasts and chocolate dessert. As tempting as the food was, it was really the glass (and what was soon to be in it) that we focused on.

Cameron Hughes, you see, is a master negotiator. He goes to the top wineries across the planet and takes their extra wine off their hands. Because those wines are often in very limited release, the wineries do not allow any additional wines to be sold under their name, so Hughes releases them under his own name. You won’t know which high buck winery your beverage came from, but it won’t matter whose name is on the label because the wine is some seriously fine wine.

K’s favorite? Lot 303 — the Stag’s Leap District Cabernet Sauvignon. It started faintly sweet and full then slowly gained deeper, dark fruit flavors. My favorite was Lot 242– the Atlas Peak Chardonnay. Normally, I don’t care for Chardonnay. The flavors are far too warm, too heavy and the wrong kind of sweet. This, however, was *un-oaked* Chardonnay which tastes more citrus and mineral, almost like a Sauvignon Blanc.

Under their original labels, these wines are very expensive. But as part of the Cameron Hughes “Lot Series,” they go for between $11-28 per bottle. The wines can be ordered online or can be found at Sam’s Club or Costco liquor stores. They definitely have a cult following and people stalk the release of the spirits, so you have to act fast to find them. The Cameron Hughes website also has a locator that can help you track down the wine near you.

Trust me, you will be a hero if you bring a bottle or two to a holiday gathering or put a bow on one as a gift. And no one has to know you were frugal and only paid pennies on the dollar for what some other suckers are paying big money for. Everyone’s a winner!