On our 11 month-a-versary we ate mediocre pub food because we went to a kick butt Suburbs/Bruce Allen tribute show at First Ave. Good day.
The next day happened to be Valentine’s Day and we decided to cook like we’ve never cooked before — in the upper echelons with Eric Ripert, Michel Richard and … Howie from Top Chef. And it turned out better than anything we could have imagined.

We started with an amuse bouche from Eric Ripert’s “A Return to Cooking.” I realize an amuse bouche is just supposed to be one perfect bite, but I couldn’t bring myself to only buy two figs, somehow four felt better. I’d never cooked with figs before and learned two things — figs are extremely sticky and really hard to peel. However, I persevered, wrapped those bad boys in Niman Ranch bacon and sprinkled some caramelized shallots over the top. A lot of work for two bites, but those two bites were *so* worth it. Sweet, rich, salty, oniony and they helped us focus as we moved forward in the kitchen.

For the salad course, we managed to get a little Top Chef action into the game with this vanilla butter poached lobster on citrus arugula salad from chef Howie in season 3 (from the Quickfire cookbook). K got the messy jobs this time and not only got the lobster tail out of the shell, but supremed the citrus fruit as well. He melted an entire pound of butter, we scraped in two vanilla beans and poached the lobster until it was light and tender. We tossed the navel and blood oranges, tangerines and grapefruit with the arugula and drizzled on the citrus pepper vinaigrette. K laid the lobster tail on top and we enjoyed the delicate cloud of lobster with a soft undertone of vanilla that played off the sweet and tart citrus that offset the peppery arugula. In short — OMG. We died and went to salad heaven with this one.

After the heavenly surf, we moved on to the turf with a pan-roasted rib eye steak with garlic-parsley béarnaise from the Michel Richard book “Happy in the Kitchen.” And we were happy indeed. After letting the bone-in, dry-aged rib eye sit covered in sea salt for about 10 minutes, K seared it in olive oil in a cast iron pan. Then he popped the pan in the oven for a bit, then brought it back out and seared the steak again. I managed to scramble the eggs for the béarnaise sauce on the first try, but quickly ditched them and started over. The second time was the charm. The steak was soooo amazingly juicy and flavorful (no doubt because of the addition of my favorite food group — salt) and the sauce was a great, creamy garlicky pairing with hints of cool Italian parsley.

While enjoying our meal, we were also enjoying a David Bruce Pinot Noir that K picked out for the occasion. It was rich and fruity and the absolute perfect complement to the steak.

We went back to the Eric Ripert book for the dessert recipe, but his was for a lavender panna cotta. We’d recently had a blissful rosemary panna cotta at Northeast Social so we subbed the rosemary for the lavender. The recipe called for sheets of gelatin, but I could only find powdered gelatin so we had to guesstimate how much to put in. We underestimated a little so the panna cotta was a little too wobbly, but the flavors were awesome. The rosemary was resinous and piney, the panna cotta creamy and the honey (which came from a local backyard beekeeper) was sweet and luscious. 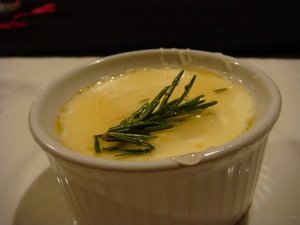 With dessert we enjoyed a small bottle  of Elysium dessert wine which, if you’re counting (because I wasn’t) brings me up to a whopping five glasses of wine. Good thing we were dining in.

Best Valentine’s Day ever. Unbelievable food, divine wine and the best company a girl could ever ask for. The only way it could have possibly been better would be if Eric Ripert and Michel Richard had been our private chefs. But that would have been awkward. And there wouldn’t have been room for all of us to curl up on the sofa with the dogs for a little TV after dinner. Eat your hearts out Ripert and Richard!