When called upon to make the food of the gods, the chefs in this episode of Top Chef Masters went with everything from coconut jam to pork to fish. While Susur Lee’s roasted pork loin looked delicious, we thought it was unlikely we would find caul fat anywhere so we chose to make Jonathan Waxman’s seared scallops with Romesco sauce and celery root puree (recipe here).

Romesco sauce is a spicy tomato sauce with ground nuts and bread added to thicken it. K roasted tomatoes, onions, hazelnuts and almonds in the oven while I got started sautéing the bread in olive oil. To the roasted and toasted ingredients, olive oil, paprika and chili flakes are all added in a blender to make the sauce. Except there was a lot of sauce, almost more than the blender could handle so K spent an inordinate amount of time (and extra chicken stock) trying to make it into something sauce-like.

While K and the blender were toiling away, I boiled the potatoes and celery root for the puree. If you’ve never seen celery root, it’s a nasty, ugly, dirty bulb with one green sort of celery-esque shoot coming out of it. It smells like celery, but looks like something you’d throw out in a dirt clump. However, if Jonathan Waxman said we could make something beautiful out of this thing, I believed him. So while the root veggies were boiling away, I sautéed the leeks and spinach in a little olive oil and blanched the green beans. K pureed some basil and olive oil as a sauce for the green beans and it looked like everything was coming together.

The potatoes were tender and the celery root felt like it was too so they were drained and pureed, but the celery root wasn’t really cooperating. It just kind of sat there, suspended and stringy, in the potato puree. Maybe it would soften up if we left it for a little while…

In a pan of hot oil, I sautéed the scallops for about a minute and a half on each side until the middle was still underdone and the outside was seared. Everything was ready for assembly.

We took a bite. The scallops were perfect and sweet and the substantial, spicy Romesco sauce was amazing — nutty with a little bite! The spinach and leeks were delicious. The green beans were not as good as the spinach and leeks but were definitely good. The buttery potato and celery root puree was awful. Those woody chunks of celery root ruined the entire puree and we both kept having to pull the strings out of our mouths. Gross. K soldiered through for a while longer, but I gave up on the puree entirely.

Conclusion, I’m sure we missed something that chef Waxman did to make his puree fantastic, but I think the celery root is ugly for a reason: It’s not fit for human consumption. Honor your scallops and make this dish. Even if you cut the recipe in half you’ll have lots of leftover Romesco sauce. We used ours over grilled swordfish (grilled tuna would be great too) one night and some pasta the next. Honor your taste buds and just make a potato puree, hold the celery root. 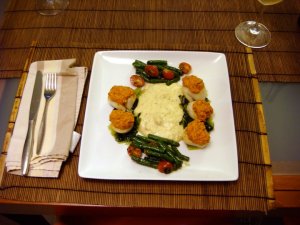