During this challenge the contestants were tasked with making lunch for a bunch of middle schoolers — with a whopping budget of $2.50 per child. Having cried my way through Jamie Oliver’s Food Revolution show, I was aware of the challenges facing schools in feeding children things other than french fries and crappy pizza. Some of the Top Chef’s rose to the occasion, others didn’t (Angelo — celery with peanut butter foam, really?!?)

Because it was the winning recipe (and because it looked really good) we went with the pork carnitas tacos with pickled onions, black bean cake and roasted corn salad. It also helped that much of this was make-ahead. K bought a 3 lb pork butt (the smallest he could find) and put it into the crock pot with some chicken stock and spices before he left for work. He just let the crock pot work its magic all day. I pickled the onions the night before and let me tell you … pouring boiling hot water over onions really releases that acidic oniony smell *all* through the house. Before I left for K’s place, I husked the corn and put it on the grill until it was roasty and a little charred. The stage was set for deliciousness.

K cut the corn off the cob and tossed it with lime juice, cilantro, shallots, cherry tomatoes and a little sugar and salt while I started the black bean cakes. Instead of the sweet potato “nests” on top of the bean cakes, K had the inspired idea to fry up tortilla strips like we had for Marcus Samuelsson’s soup. I sautéed the onions and garlic and ground up the black beans. The recipe calls for half of them to be ground and half to be whole, but my “love” of black beans is still blossoming and I can only handle them if they’re ground up and I don’t have to bite into a whole, mushy bean. (shudder) I mixed the beans with some oats and the onion and garlic and I threw in a little chili in adobo sauce because the recipe seemed kind of bland on its own. I made little cakes, coated them with flour and fried them up in some olive oil.

If you haven’t surmised this yet, I am a rather particular eater. I used to be very picky, but now I’ll eat lots of things, they just have to be the way I say. Not being a lover of tomatoes, I don’t care for salsa. So we took the recipe for salsa, swapped in avocado and took out the tomato and we had delicious guacamole that K mixed together! We didn’t have the tools (or the motivation) to make our own oat tortillas, so we used pre-made flour tortillas and started assembling.

The pork carnitas were soooo tender and delicious and their juices soaked right through the tortilla and dripped down our arms. Best kind of tacos! The guacamole provided a nice, creamy, acidic foil to the rich pork. The corn salad was amazing — sweet corn with tart lime and cool cilantro. I thought the oats made the black bean cake too dry and I put too much chili in adobo in there, but K didn’t think they were too spicy. The tortilla strips on top were crispy, salty fabulous.

The whole thing had lots of little components, but came together pretty quickly and is totally worth making again. Lucky kids who got to have them for lunch that day. Too bad they had to go back to french fries and crappy pizza the next day. Also, because there was so much pork, we had a lot of leftovers. Instead of making tacos again, I made a batch of the “sloppy d’oh” barbecue sauce and made pulled pork sandwiches! 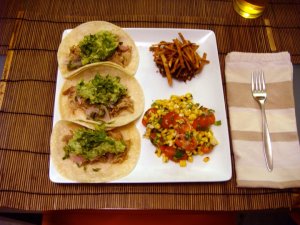 Bonus:  K and I are goin’ to Vegas! I’m sure it will be a festival of eating. If you know of any place(s) we absolutely must not miss, let us know!
Sad opposite of a bonus: I came down with the flu … the day before leaving for Vegas. Extra points if your restaurant suggestions include places with good soup and juice.