Contestant Kenny gets knocked around by the judges a lot for having too many ingredients in his dishes, but wow … the Kenny creation of peppered lamb with fig-pistachio bread pudding, fig jam and vanilla-morel demi glace looked soooooo good.  And we realized that we’ve done Top Chef night for long enough that now we’re looking for challenges we haven’t tackled yet. Bread pudding was one of those things!

But first, I ran into a problem. It would seem that figs are not in season right now and I couldn’t find them fresh. I did, however, find dried figs and some locally made (in St. Joseph, I think?) fig spread. Sadly, I was in a hurry when I threw things into the bag to go to K’s house and forgot the dried figs. Blerg. The fig spread would have to carry all the fig weight in this dish.

As soon as I arrived (fig-less) at K’s, I peppered, salted and thymed the lamb and popped it into the fridge to let the goodness set in. K started on the demi glace and fig jam. Because of my fig-getfulness (okay, I’ll stop now) the fig jam basically consisted of the fig spread, some prune juice (because we couldn’t find fig juice), port and a vanilla bean. K not only scraped the vanilla bean into the jam, he threw the bean in there as well as the jam simmered down. He did the same vanilla bean trick with the demi glace.

Because we didn’t have the called-for glace de viande (I think that’s veal demi glace), K reduced some beef stock until it thickened, then added in the thinner, un-reduced beef stock, port, prune juice, vanilla bean and a melange of dried mushrooms. Turns out dried morels are insanely expensive, but he found a less expensive mix of dried mushrooms that included morels. Clever boy!

Everything was starting to smell pleasantly vanilla-y and I got to work on the bread pudding. I tossed together the cubed bread, pistachios and goat cheese and kind of coated everything with the fig spread (in lieu of the dried figs). Then I mixed in the eggs and cream and spooned it all into a muffin tin. As we popped that in the oven, we heated up the grill pan and seared the lamb chops.

By the time the lamb had rested, the bread pudding was puffy and browned and the sauces were piping hot and ready to go. As K looked at the Bravo website to get an idea of how chef Kenny plated his dish, he noticed a grilled onion and a broccolini spear on the plate. Of course, due to the seasoned negligence of Chad the Bravo intern, these were not in the recipe.

Everything was plated beautifully, though, and if you are looking for an earthy, rich, savory feast this is it! This dish would actually be really good around the holidays so you could literally say you were eating figgy pudding. The lamb turned out lovely — the chops were small and the meat was *really* stuck to the bone, but it was delicious. The deep meatiness of the lamb was nicely tempered by the sweet and mellow vanilla flavor of the fig jam. The bread puddings had nice chunks of melty goat cheese in them and a salty pistachio crunch and they absorbed the demi glace to give the whole thing a nicely balanced depth of flavor.

It’s definitely not a quick fix meal, but whether it’s for the holiday or just any day we’re giving this one the thumbs up! 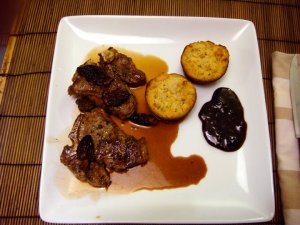