I’m thinking of lobbying the producers to change the name of this season of Top Chef All-Stars to Top Crock Pot. Or Top Pulled Pork, since I guess the crock pot thing applies only to us. Pulled pork seems to be a popular dish for the chefs, even when the theme of the challenge is to use Gulf seafood. Despite the fact that it doesn’t seem like pork and fish fit together particularly well, we chose to prepare “snapper,” pulled pork and citrus grits as created by Richard Blais.

Snapper was available at the store, but it wasn’t the kind approved by the Seafood Watch Program so we went with the comparable (and sustainable) tilapia. We also skipped the pickled vegetables in the recipe because we were on kind of a tight timeline for this particular Top Chef Night.

As has become the routine, I prepared the pork shoulder over lunch and threw it in the crock pot so it could spend the afternoon becoming wonderful. The recipe calls for the pork to be coated in coffee BBQ rub, but there are no ingredients or directions for the coffee BBQ rub (thanks again Chad the Bravo intern). We had a Northwoods BBQ rub mix from Penzey’s Spices and I had a tin of sugar-free mocha fake coffee. I liberally sprinkled the pork with the Northwoods BBQ rub, sprinkled on a very little bit of the mocha mix and browned the meat in a saute pan before putting it into the crock pot. I then filled the crock pot with heavily salted water and left.

When we arrived home, K prepared the tilapia by sprinkling it with sea salt and pepper. It was good-looking fish!

The last time we made grits it took forever. This time, I had an idea to soak them, just barely covered in tepid water, for 30 minutes. I put chicken stock and some milk in a stock pot, heated it up and added the mushy, pre-soaked grits. This turned out to be a brilliant idea as the grits turned out creamy and cooked faster than they had in the past. Okay … I have to credit a food science show I heard awhile back on NPR’s “Science Friday” show. While I was stirring the bubbling pot, K was zesting lemons and limes and shredding cheese for the grits. 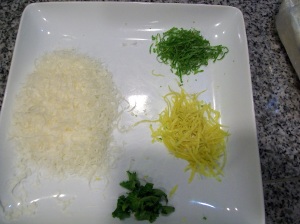 When the pork was tender and ready to be shredded and the grits were fluffy, K sautéed the tilapia in extra virgin olive oil. I added the citrus zest, cheese and a pat of butter to the grits and we were ready to enjoy the feast.

The pork was soft and delicious — the BBQ rub gave it great flavor, a bit of spice with undertones of coffee/chocolate mole. The grits were properly set, nicely chewy and had a light lemon/lime zip. The fish was delicate and tasty, simply seasoned, not fishy and very fresh. The recipe title is actually “crispy Gulf snapper” and if you look at the photo on the website, it appears Blais breaded the fish, but it was tasty the way we prepared it as well. The combination of pork and fish seemed a bit strange, but it worked. It was a heavier/lighter combo brought together by the creaminess of the grits. And it’s inspiring us to look at “surf and turf” in new and exciting ways!