Crisp and sunny, the sun sparkled and the wind whipped as we walked towards the Brooklyn Bridge. Our plan was to get a slice at the legendary Lombardi’s Pizza (the first pizza place in New York City, founded in 1905) then walk over the bridge for a comparison slice at Grimaldi’s (which Zagat recently called the Best Pizza in New York). Others must have had this plan before we did because both pizza joints only sell whole pizzas — no pizza by the slice. Knowing we couldn’t polish off two entire pizzas, we scratched the pizza-off and went in for lunch at Lombardi’s Pizza.

A small, winding restaurant with basic, stereotypical Italian restaurant decor, Lombardi’s uses a coal-fired oven and simple ingredients to build their New York pizza. We went with the basic margarita pizza as a base — fresh mozzarella, San Marzano tomato sauce, romano and fresh basil — and we added house-roasted red peppers and crisp pancetta.

Goo-oood pizza! The crust was Goldilocks perfect, not too much bread, not too flat and crackery. It had a nice smoky char and was crispy, not mushy at all. The cheese was fresh and melty, the pancetta was salty with just enough crunch and the peppers were tangy.

We spent the rest of our sunny afternoon wandering about Brooklyn, walking back over the bridge and shopping in SoHo (something I wouldn’t recommend on a pleasant Sunday afternoon, it was crazy packed with people). We walked miles and miles. Our feet ached and we had worn through our blister protection bandages. So we found dinner respite in Chelsea (the Meatpacking District). The calm siren song of Jonathan Waxman’s Barbuto beckoned us into what is clearly a neighborhood hang out.

We had nearly front row seats to the bustling open kitchen and were fascinated by the precision of the chefs in their respective jobs. In no time our salumi plate came out with thinly shaved prosciutto de Parma, sweet and fatty mortadella, salty coppa (cured pork collar) and a savory rosemary foccacia.

Plates are set up to be family style and we shared a little bit, but mostly devoured the dishes we’d each chosen. We watched the “meat chef” baste K’s roasted chicken in the open fire oven. The skin was shatteringly crisp, the chicken substantial and tender and the salsa verde was an herby green garden of goodness. 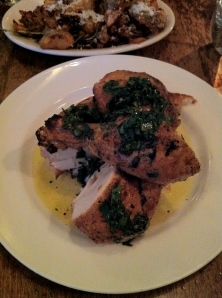 We did equally share the crispy potatoes with parmesan and rosemary, which were simple and magnificent. If they were baked, it’s nearly unbelievable because they were so crunchy. If they were fried, they were greaseless.

Crispy Potatoes with Parmesan and Rosemary

I had some of the best, most pillowy, achingly supple gnocchi I’ve ever enjoyed. The spinach was earthy and the peas were a perfect green snap. The entire dish was presented in a simple butter sauce.

I have no idea how we made room for dessert, but we just couldn’t say no. We shared the chocolate  Budino (thick pudding) with whipped cream and blood orange sorbet. The Budino was so dense that if we’d tipped the dish over not a drop would have fallen out. It was creamy and packed with really good chocolate flavor. It would have been too sweet, but the fresh whipped cream mellowed it out in a dreamy way. The sorbet must have been made from blood oranges that were picked, squeezed and frozen that same day it was so incredibly fresh.

A pleasant, rollicking atmosphere, great and cordial service, a neighborhood location and simple, but amazing food was enough to make us forget our sadness that we were leaving New York the next day.