Confession: I am often a lazy foodie. Byerly’s is on the way home from the office in which I’m currently working. Getting to any local food co-op means a longer, more inconvenient hike. This means I sometimes adapt recipes in order to fit the most acceptable things I can find at a conventional store. This is a long way of saying we had breaded chicken  instead of breaded turkey when we made Naomi Pomeroy’s breaded “turkey,” chanterelle smashed potatoes and cranberry-cherry chutney recipe (click here for the recipe).

K was not aware of this until after my shopping trip, but gamely went along with the plan to use organic, free-range chicken breast  instead of a conventional turkey breast. I removed the bone, sandwiched it between two sheets of plastic wrap and smacked the heck out of it with a mallet until the chicken was very thin.

While K peeled, cut up and boiled some Yukon Gold potatoes  and sautéed some formerly dried (now reconstituted in hot water) chanterelle mushrooms and garlic, I made the chutney with dried cherries, cranberries, celery, shallots, ginger, orange zest, brown sugar and sherry vinegar.

We breaded the skin-on chicken in a mixture of coarse-ground cornmeal, thyme, sage and cornbread mix and, while K was mashing the potatoes, I pan fried the chicken. The recipe calls them “smashed” potatoes, but we’ve smashed potatoes before and that was with the bottom of a big pot. These felt more “mashed” to me. In addition to the olive oil called for in the recipe, K had to add some milk to smooth out the potatoes.

When we ate, we reminisced over the tastes of Thanksgiving on a lovely May evening. The chicken was crisp, redolent with corn crunch and herby flavors on the outside and moist and tender on the inside. The potatoes were fluffy and the mushrooms gave them a great earthy bottom note. The chutney was FANTASTIC — tart and sweet and good enough to eat all on its own. 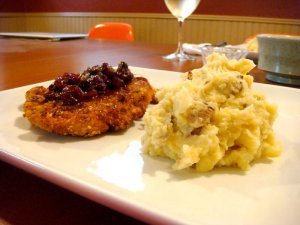 Alterations: We boiled the potatoes instead of using a pressure cooker or steamer, we used chicken instead of turkey, we used dried cranberries instead of fresh/frozenl, added a bit of milk to the potatoes.
Soundtrack: The Cars (again) because we’d been to their show at First Ave. the night before.
Would we make this again? Yes, YUM! Ditch your traditional Thanksgiving food and try this instead, it’s a guaranteed hit.