We purchased only one souvenir for ourselves during our New York City honeymoon and it was, appropriately, a cookbook. With a gaping hole in Top Chef TV programming, we ditched Bravo for the night (for the ridiculous, but absolutely addictive “Storage Wars” on A&E) and decided to take a trip back to NYC for the night with a recipe from “The New York Restaurant Cookbook” by Florence Fabricant.

While we did not make it to the sprawling Chinatown Brasserie, their Shrimp With Mango recipe seemed like just the thing on a hot, sticky Minnesota summer day. Simple ingredients — shrimp, egg white, cornstarch, sugar snap peas, mango, ginger, garlic, rice wine, sugar and rice and half an hour were all it took to transport us back to a warm spring day, hungry from touring Manhattan.

We threw some sushi rice into the rice maker and left it alone to work its magic. K and I usually swap shrimp de-veining duties since it’s such a gross (but necessary) task. While I carefully scraped away shrimp “guts,” K beat up an egg white and got the cornstarch and salt ready to toss the shrimp in. He also trimmed the sugar snap peas — a chore he declared, “sucked,” while I sliced up ginger.

Awhile ago, we received a mango splitter from my mom. I am no fan of one-trick-pony kitchen tools and this large, clunky thing languished in a drawer, unused for many months. I was wrong to slag off the mango splitter. We used it to take the pit out of the mango for this recipe and the mango splitter rocks. Hard. One slice down the middle and you’ve got two big sides of mango. There’s even a little bit of deliciousness left on the pit to snack on until dinner is ready.

With all the prep  work done, we threw the mango, peas, ginger and garlic into a bowl so it would be ready for the wok. 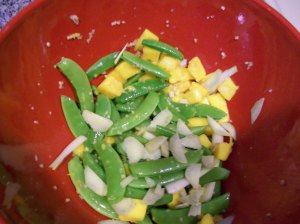 K manned the hot oil in the wok. The shrimp had been tossed into egg white, cornstarch, salt and pepper and he threw them in, stirring until they just turned pink. He took them out then threw in the peas and mango mixture and stirred, keeping the peas crisp. We added a little rice wine and a pinch of sugar then threw the shrimp back in with a  little dissolved cornstarch to thicken the sauce. The whole cooking process took about six minutes, tops. Add a little steamy rice to the plate and it was time to eat.

The rice was good and tender and sticky and absorbed the sweet sauce. The mango was nectarous, the peas were fresh and crisp and the ginger still had great bite. So delicious and so simple, our own little slice of New York’s Chinatown in our dining room. Heaven. 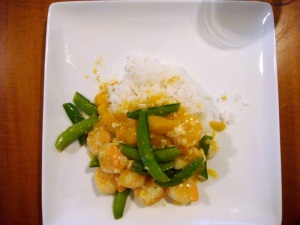 Alterations: The recipe called for radishes, but I forgot to buy them. It also called for green onions, but ours were too wilted to use so we composted them instead.
Would we make this again: Absolutely. The next time we need a quick and easy dinner option, we’ll be calling up this dish from the bullpen.