It’s no secret we’re big fans of Heidi’s restaurant in Minneapolis and Stewart and Heidi Woodman who run the gorgeous, delicious place. So when we found ourselves faced with a glut of cilantro, K went straight for the “Shefzilla: Conquering Haute Cuisine at Home” cookbook and we decided to do grilled lamb with yogurt-cilantro sauce and mini buttered potatoes. We had the privilege of taste testing some of the cookbook dishes before the book was published and, while this wasn’t on the menu the day we visited Stewart and Heidi (and family) at home, it could easily be on the menu at any restaurant or, even better, on your home table.

The recipe calls for lamb racks, but I found locally raised lamb chops from Dorsetdale Shepherd Farms at the co-op and went with those instead. K lamented the loss of the bone “handles,” but I’m stubborn and adamant that if we’re going to eat meat, we’re going to make sure it was as happy and free as possible before it gets to our table as humanely as possible. Also, the lamb chops had a lot more meat then wussie little frenched lamb rack ever would.

While I can’t give you the exact recipe (definitely get the Shefzilla book), it’s easy. Marinate the lamb in the fridge in a few hours with some salt, pepper, olive oil and garlic. While K addressed the yogurt-cilantro sauce, I cut up Yukon gold potatoes into chunks and got them boiling.

K blanched the cilantro for the sauce while I toasted fennel seed, cumin, red pepper flake and fenugreek just until the kitchen started to smell like Morocco. 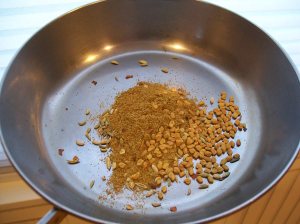 I ground up the spices with a mortar and pestle while K sautéed garlic, ginger and onion. Then, the fun part. Throw the spices, everything in the saute pan, cilantro, plain yogurt and a little salt into the blender and let ‘er rip for about three minutes. Keep blending and add a little more oil and you’ve got your sauce.

Then it was time to do some serious stove time. The potatoes were tender so I drained them. K got the lamb chops started in the grill pan and I melted a fair amount of butter in a pan, threw in a little thyme and about 1 tsp. of gin (to replace the ground juniper in the recipe) and put the potatoes in their tasty bath. 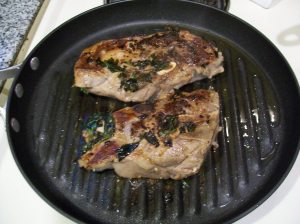 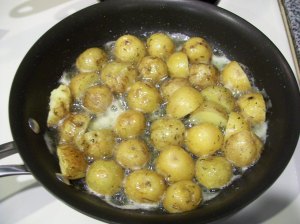 Potatoes Bubbling in a Buttery Bath

With the potatoes crisp and the lamb grilled and resting, the smell throughout the house was incredible. Both dogs sat at the kitchen threshold with their noses in the air, sniffing away. Dinner (for us, not the dogs) was served.

The lamb was medium rare, juicy and tender, smoky and the slightest bit gamey, in a delightful way. The potatoes were crisp and redolent with hot, sweet, creamy butter. The sauce was cool and tart and the spices sang in perfect harmony. In fact, we had leftover sauce and used it a few days later as a dip for oven fries. It was perfect. You could absolutely use it for just about anything, very versatile. These recipes really offered everything you could want — dinner like you’d get at a restaurant, but at home and in a reasonable amount of time (about 30 minutes). Those nasty “dinner in a bag” meals promise the same thing, but this is real food. And it tastes real. And once you eat it, you’ll be so glad you did. 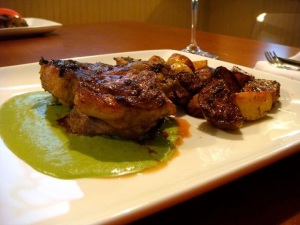 Alterations: We used thick and meaty lamb chops, instead of rack of lamb. we couldn’t find juniper so we used a little gin in the potatoes. You couldn’t taste it and I’d leave it out next time, not necessary.
Soundtrack: The incomparable Paul Westerberg. Just felt right.
Would we make this again: Yes we will. We often have extra cilantro and this is going to be the go-to “use it up” recipe.