Leading up to the debut of the new season of Top Chef Masters (Wednesday, July 25) — yes it’s on my calendar and yes, this makes me a dork — we are going through some of the Top Chef Masters recipes we missed the first time around. Chef Roy Yamaguchi didn’t make it far in the competition during the first season of Top Chef Masters, but it certainly wasn’t because of these short ribs. The entire original recipe (found here) was for short rib kalbi and mahi mahi with yuzu ginger essence sauce. But that’s *a lot* of expensive protein for two people so we went with the short rib kalbi with soy mirin sweet potatoes and soba. Here’s how we made this Top Chef Masters recipe home cook-friendly for your typical Wednesday night:

Put all ingredients except for the short ribs in a sauce pot. Bring the mixture just to a boil then turn off the heat and let cool (can do this step well ahead of dinner).
Marinate short ribs for at least 30 minutes (either in bowl or bag).

Twenty to 30 minutes before you want to serve dinner, get your grill (or grill pan, if you’re indoors) hot and sear the short ribs.

* This is where we should have called it quits on the grill, but didn’t because the recipe says to grill the ribs until they’re done. The sugars in the marinade got really charred and burned, but the meat on the inside was far from done. This is why we recommend searing only and finishing in the oven (or toaster oven).

Once you’ve got a nice sear on all sides of the short ribs, place in 400 degree oven (or toaster oven) to bake until done to medium (approximately 15-20 minutes). While you’re waiting for the ribs, work on your soba and sauce.

Boil your soba noodles in salted water until tender (approximately 3-5 minutes). Heat oil in a pan and saute mushrooms, garlic and ginger until mushrooms are browned. Reserve noodles and mushroom mixture separately until ready to serve. 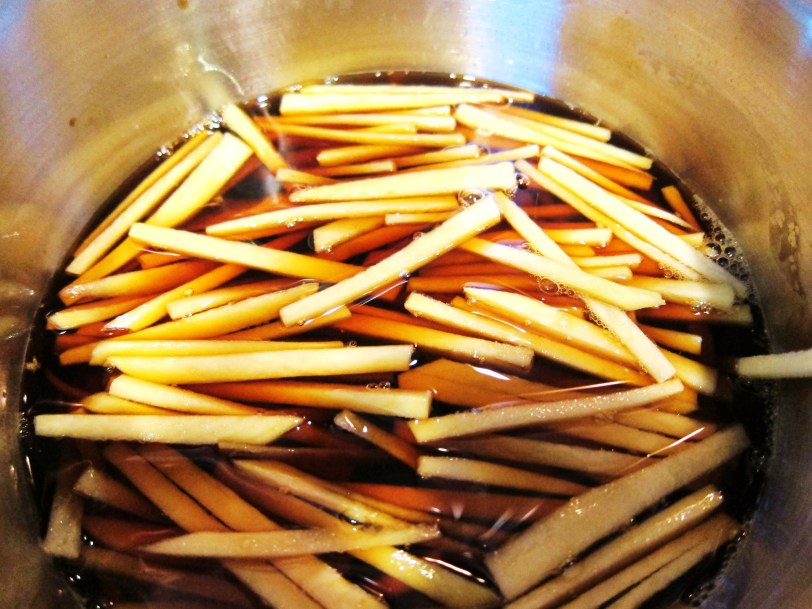 Combine all your ingredients and bring to a boil until sweet potatoes are tender, about 8-10 minutes.

Check the temperature of your short ribs with a meat thermometer (should be about 140-145 degrees F for medium). When they reach that temperature, let them rest for 3-5 minutes while you get dinner plated. Toss mushrooms and soba noodles and dress with sauce. Add sauce gradually (not all at once) and taste to make sure you haven’t overdone it. The sauce and meat marinade have very similar flavors and too much sauce will make your dinner one note and too salty.

Slice your short ribs — or not, we did because one was meaty and the other had more fat and we wanted an even mix of the two. No need to drizzle any sauce over the meat, but you can add the remaining sweet potatoes.

The verdict? SUPER tasty, very savory and the whole thing took about 45 minutes (would have been less without our “grill incident”). The meat was so tender and the flavors of the noodles were sweet and salty.

Would we make this again? Yes. It’s actually a quick, simple gourmet weeknight meal. When we do make it again, however, I’d add some greens for a bit of freshness. Maybe spinach lightly sautéed with garlic.