Rabbit is a depressingly delicious thing to cook because it looks like … well, a rabbit without feet or a head. It also (strangely) looks a bit like chicken. We’ve both eaten (and enjoyed) rabbit before, but have never cooked it. So when chefs Chris Cosentino and Patricia Yeo fired up their wild outdoor cooking station for this rabbit dish, we knew it was time. Here is the original recipe for his rabbit and its bits, acorn squash and agrodolce (click here for recipe). Here is how we made it home cook-friendly (and took out the squash because Fun Fact: I HATE squash. Beets too.)

I found a whole rabbit (already cut into pieces) at the local upscale grocery (Byerly’s), but they are generally also available at specialty meat/butcher shops. Early in the day, I took it out of its packaging, rinsed it, dried it with paper towels and separated the legs from the back/loin and bits.

I refrigerated the back/loin and bits and seared the legs in a hot pan with a bit of olive oil.

When the legs are browned, pop them in the crock pot and cover them with chicken stock (or generously salted water). Slice a shallot in half and put it in the liquid. Cover the whole thing and let it simmer for several hours.

Later, thinly slice the sweet potatoes, toss in extra virgin olive oil, sprinkle with rosemary, thyme and salt. Put into a 400 degree oven for about 15 minutes until brown.

Make the agrodolce sauce by caramelizing the diced shallot in a little olive oil. Add the other ingredients and simmer until the liquid reduces by about half — about 10 minutes. If it starts to get too thick, turn off the heat before it turns into candy!

De-bone the back/loin and sprinkle with pepper. Wrap the meat in bacon. Heat a grill pan (or grill — we didn’t use our grill because the bacon fat causes flare ups) and sear the bacon-wrapped meat until cooked through. 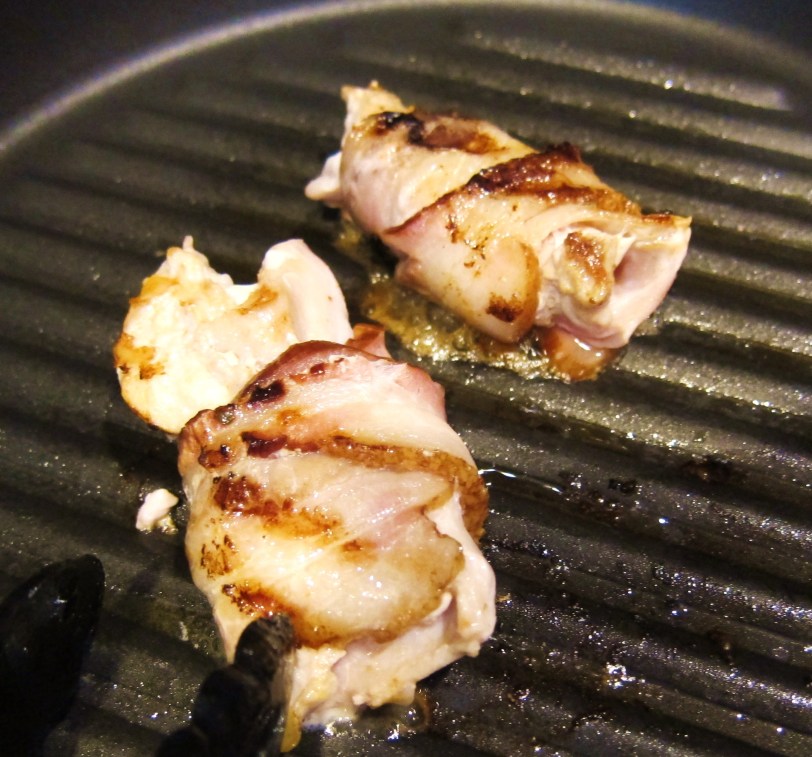 Meanwhile, add a little extra virgin olive oil to a saute pan. Generously salt and pepper the rabbit bits and sear them in the saute pan 3-5 minutes. Be careful not to over cook or they’ll get too tough.

Put your warm sauce on the plate, take the legs from the braising (crock pot) liquid and put onto the sauce, put the grilled loin/back next to the legs, add the bit and sweet potatoes and dinner is served.

This was truly a gourmet meal. The legs/thighs were so tender they fell apart, the back/loin was meaty and bacon-y flavorful. We were worried the raspberries in the sauce would be too sweet, but agrodolce literally means sweet and sour and the sauce was exactly that. It didn’t overwhelm the delicate meat, but instead complemented every bite. The potatoes were crisp and chewy and had a lovely blend of herbs.

Would we make this again? Yes! We don’t always make rabbit, but when we do … we’ll use this preparation again.

Soundtrack: Everything from the Evening Rig to the Wombats.