On day two of our Portland adventure, I was rarin’ to go … after I slapped on a bunch of SPF 55+ sunscreen. Turns out, we were staying just one block away from the largest concentration of food carts in Portland. There were more than 40 of them!! We met up with K’s high school friend who lives in Portland and got to work trying to decide what was for lunch. Ultra marathon runner and everywhere biker Scott quickly chose the Cheesus — a burger sandwiched between two grilled cheese sandwich “buns.” Because you can do things like eat a grilled Cheesus when you run and bike constantly. K settled on the porchetta sandwich from The People’s Pig. I lapped the food carts four times thinking, “I need to pick something that I can’t get in Minneapolis/St. Paul.” Given the vibrant food truck scene in MSP, it was tough to choose! Finally, I decided on Kargi Gogo — food from Georgia (the country, not the state). 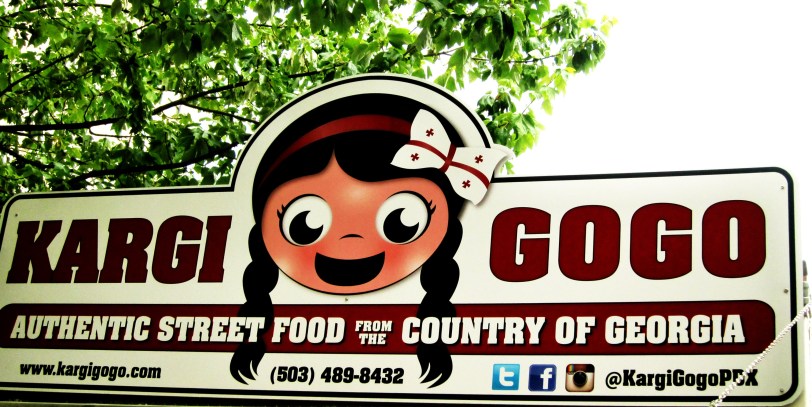 Sandwiched (ha!) between western Asia and eastern Europe, Georgia has an intriguing mix of food. I went with perfectly roasted eggplant rolled around nutty and smooth walnut filling with bright, sunny, sweet-tart pops of pomegranate seeds on top. Delicious! 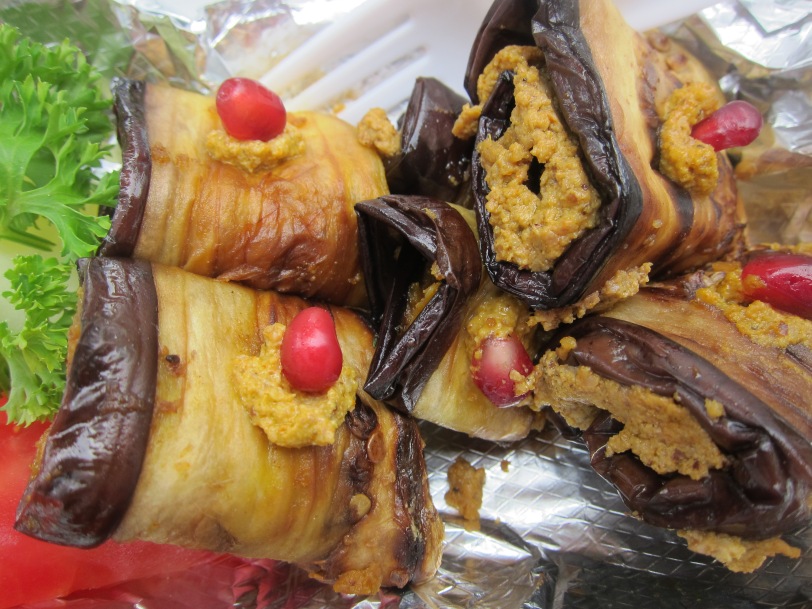 To know me is to know I am a huge fan of Tibetan momos — steamed dumplings with savory meat and/or veggie fillings. The Georgian dumplings were larger and brothier, but were substantial, savory, tender and peppery. 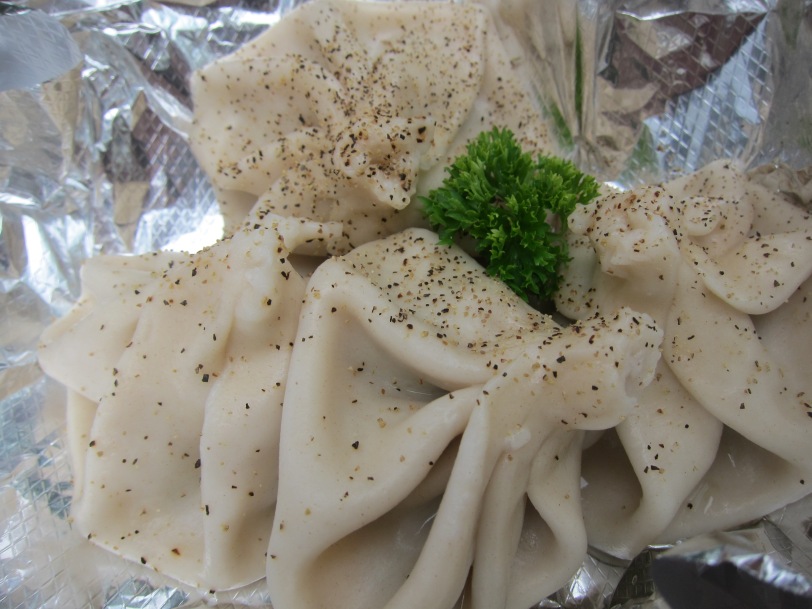 The porchetta sandwich K chose from The People’s Pig was so juicy, succulent and meaty, but the fresh flavors of lemon, garlic and fennel shone through each bite. He took a break from beer and ordered a Pop Shoppe black cherry soda to go with his sammie and said it brought him back to childhood. Then he found where they’re sold in MSP and I’m betting on the appearance of Pop Shoppe soda in our fridge very soon. 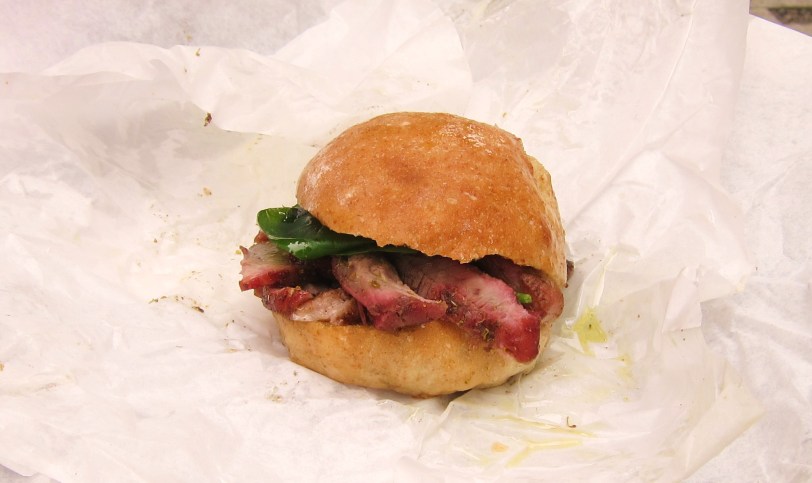 No photos exist of the grilled Cheesus. What can I say? It was a burger stuck between two grilled cheese sandwiches. It was nothing if not ambitious.

We spent the afternoon at the Portland Art Museum interacting with the Cyclepedia bicycle exhibit and lots of classic and modern art. Then we hiked over the Powell’s City of Books where we were quickly overwhelmed yet fascinated by the GINORMOUS cookbook selection.

We buzzed back to our AirBNB apartment, cleaned up and headed out on a perfectly perfect Portland evening to meet up with friends at The Woodsman Tavern. If you are looking for a place that epitomizes the Portland of “Portlandia,” The Woodsman Tavern is it. Warm, worn wood, candlelight, everything appears to be sepia-toned and everyone — diners and staff — look like they walked straight out of an Anthropologie or Free People catalog. Which is to say, the people are as ridiculously good looking as the food. 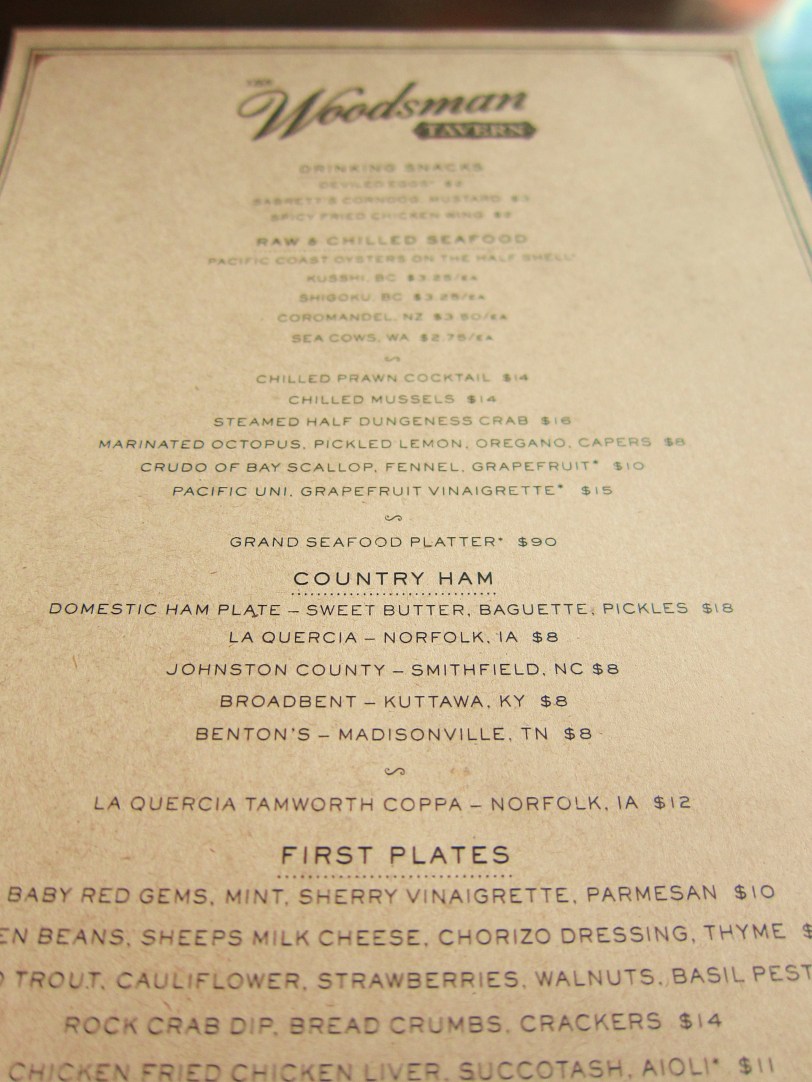 Jen and I aren’t oyster lovers, so Jim and K shared a fresh oyster platter. From what I gathered, it was slurpy and they loved it. 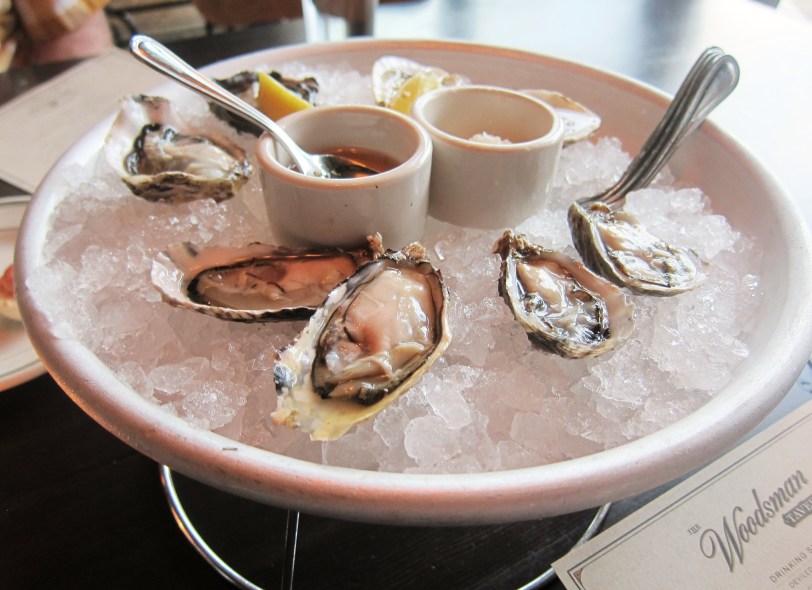 K and I were both intrigued by the salmon with country ham and smoked farro, so we both ordered the same thing (that *never* happens). And we both agree this was our best meal in Portland. Simple, perfectly cooked salmon and that smoky, al dente grain with fresh pea pods … amazing. 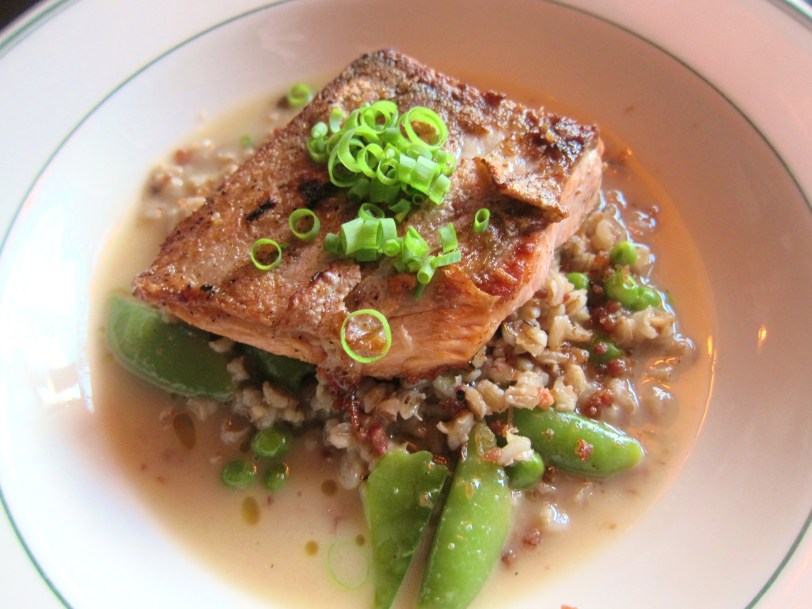 And what’s the best way to end a superb Portland evening? Hibiscus sorbet and Mexican wedding cookies. Of course.

The next day, Marathon Scott was unbelievably kind enough to play tour guide and bring us all around Portland. We ate at the Portland City Grill with an amazing view overlooking all of Portland. We hiked through the gorgeous urban forests and got our zen on at the Japanese Gardens. We made a pre-dinner stop at Hair of the Dog Brewery where K most enjoyed a “Fred from the Wood” and I enjoyed that I could refer to a drink by its proper name. In K’s words, “The wood added another dimension and complexity. You have to taste it and experience it to believe it.” 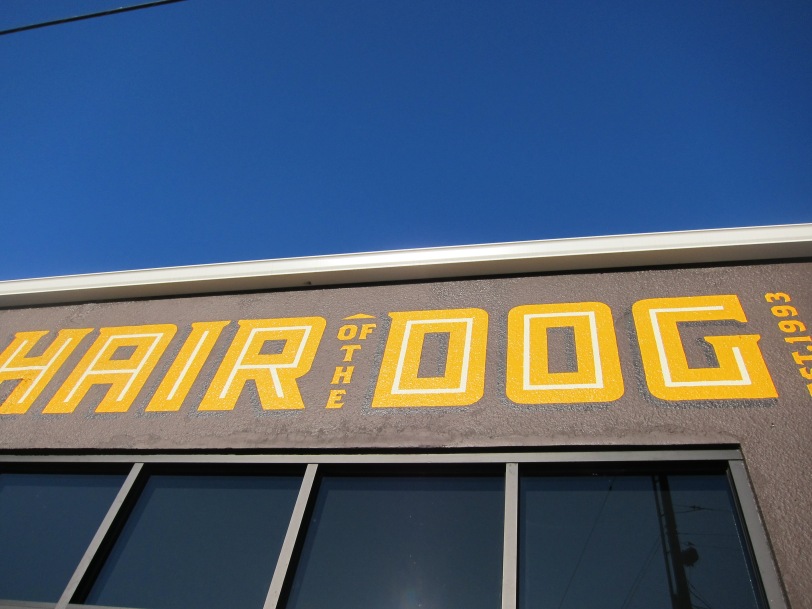 Then we gathered together with a big group of adults and kids alike in the supremely dark Montage where K ate alligator jambalaya and oyster shooters and I had fried chicken and we had a noisy, bangin’ good time. Because I am an awesome wife, I took off back to our apartment while K and his high school buddies went out for beers at The Green Dragon. He informs me that he had a Green Dragon CDA, a Cascadian Dark Ale brewed in-house, of course. “It was quite good with complex flavor. It had an interesting blend of hoppiness and maltiness at the same time,” he said. “The hops definitely come through first with a bit of the roast flavor on the back end.” 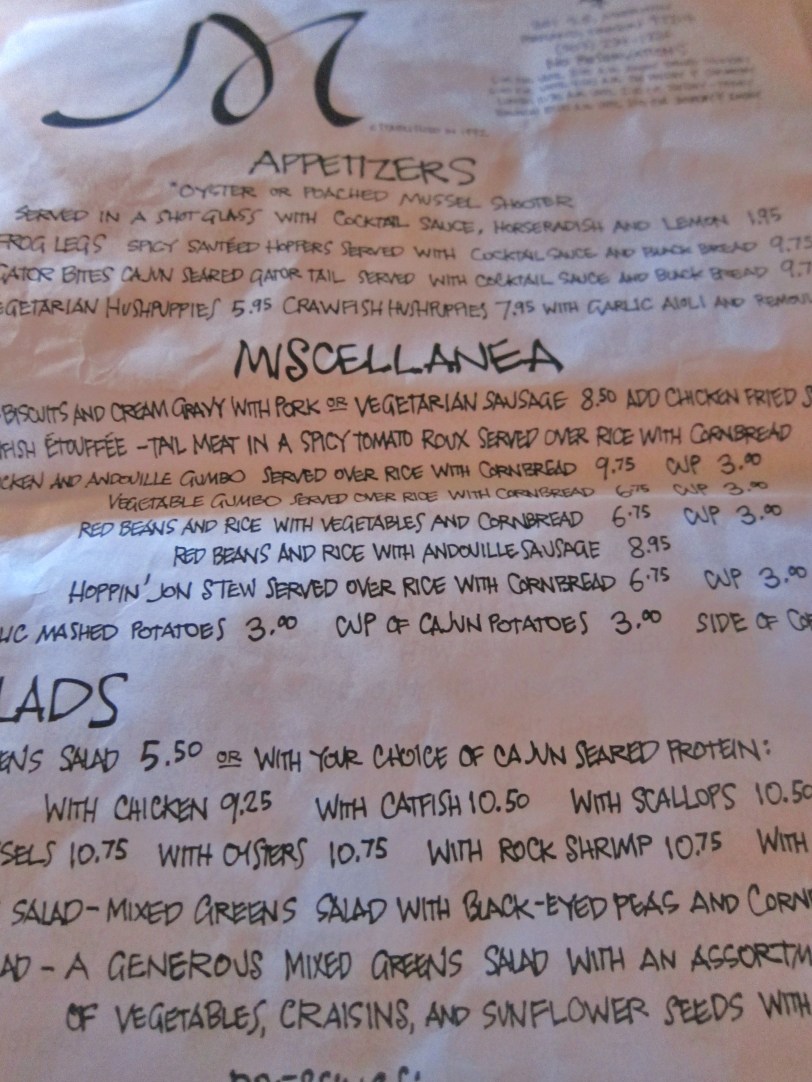 We had but one morning left in Portland before we hopped the plane to Seattle so we decided to do as the locals to: SKIP Voodoo Doughnuts. According to local food lovers, Voodoo Doughnuts are merely adequate and are mostly about the gimmicky shapes. If you want *real* donuts, go to Blue Star. They use old fashioned French brioche dough, local and seasonal ingredients and it was the best damn donut I’ve ever had the pleasure of tasting. 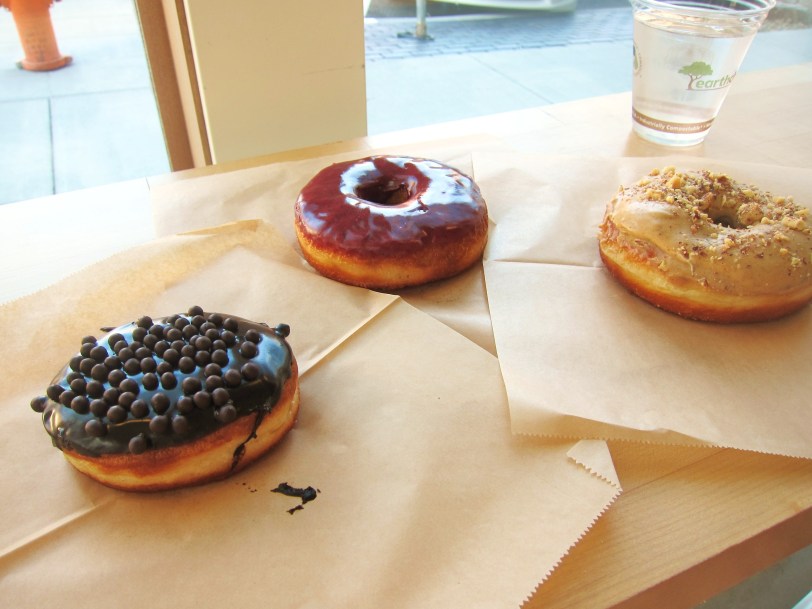 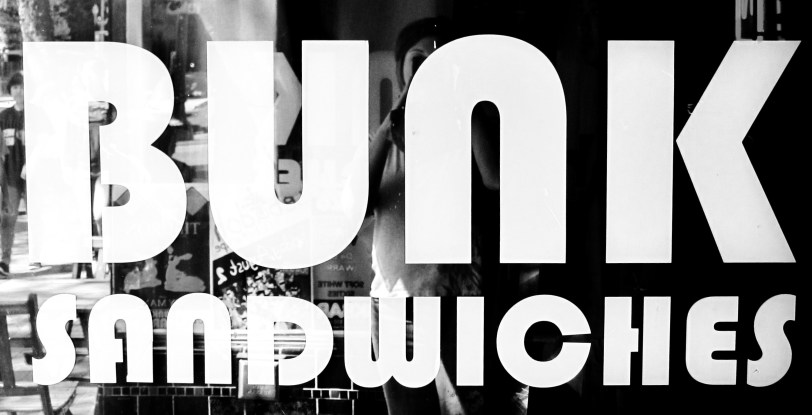 Stuffed full of donut goodness, we wandered around a sunny downtown, window shopped and hung out at parks and before we had to get back to our apartment and grab our suitcases, we stopped at Bunk Sandwiches and grabbed some food for the road because airport food sucks but roasted chicken salad with avocado and bacon do not suck.

We crammed our time in Portland full of friends and food and beer and art and culture and fun and we want to go back already! Visit Portland. Eat local. There are so many amazing choices, there is no excuse for eating generic food at a chain restaurant! Bonus: If you go in early June, you can be a part of the World Naked Bike Ride! Who would do such a thing, you may ask (as I did)? Why, between 10,000 and 15,000 people every year, of course. One word: Chafing. More words: Eat Blue Star Donuts instead.

One thought on “Portland Bites — Days Two and Three”