There aren’t too many foods that make me so excited I jump up and down like chicken pot pie made Chef Carla Hall jump around on the Jimmy Fallon Show. But when someone is that excited about a dish, we’re so on board with cookin’ it up.

In true Top Chef form, the recipe is unnecessarily complicated — use a whole chicken, pressure cook the chicken breasts, boil the rest of the chicken separately, etc. Recently we made chicken sandwiches from a recipe in Tom Collichio’s ‘Wichcraft cookbook. The chicken breast was simply poached. It was amazingly delicious and efficient. Forget all that other mess — we were poaching the chicken.

The moment I got home I started on the dough since it needed to rest for 30 minutes in the refrigerator. I chilled a metal bowl and the beaters from the electric mixer in the freezer then dissolved sugar and salt in a little water and chilled it. I put the flour in the cold bowl, added cut-up bits of butter and “cut” them together with the electric mixer (this would have been easier using a hand-held pastry blender or probably even two forks). However, when it was pretty well mixed, I added the water, squished it together with my hands and voila … dough. I wrapped it in plastic and let it rest in the refrigerator.

When he got home to “Butter Central” (what the kitchen was dubbed that night due to an almost all  butter dough and buttery veloute), K started poaching the chicken (1/2 of a large breast and some chicken thighs — all skinless).  He filled the big pot with water, salted it so it tasted like the ocean, floated a few onion slices, carrots and celery, thyme, rosemary, a bay leaf and sage and let it just come to a boil. Once bubbles began to break the surface, he put in the chicken and let it simmer gently for 10-15 minutes. Then he turned off the heat and let the chicken sit in the tasty brine.

He then sautéed the large pile of onions and carrots with the same variety of herbs that went into the poaching liquid.

While K was addressing chicken and veggies, I was rolling out the dough and cutting small circles (for the bottom of the bowl) and large circles (for the top of the bowl). The idea put forth in the recipe was that the large pieces would be baked on top of an upside-down bowl so it would form a dome to place atop the bowl of filling. I was pretty sure our bowls were oven safe so I baked the big pieces on top of the upside-down bowls, which I’d sprayed with non-stick spray first. K brushed egg wash on top of the dough to give it a shiny finish.

After about 20 minutes in the oven the dough “bowls” looked brown, but when I took them off the actual bowls, they were a tad limp so I put them back into the oven for a few minutes more. The entire “dough bowl” step could have been skipped and flat tops could just have easily (and with less mess) baked directly on the sheet.

While the dough was in the oven, I melted butter and whisked in flour to make a light caramel-colored roux then added chicken stock. The mixture came to a boil and I let it simmer for awhile to thicken. I added a touch of heavy cream and it seemed like the right consistency so K added the sautéed veggies, some crispy celery and some formerly frozen peas we’d lightly steamed in the microwave. K took the chicken out of its warm brine bath and shredded it then put it into the sauce as well just as the pastry was on its way out of the oven. 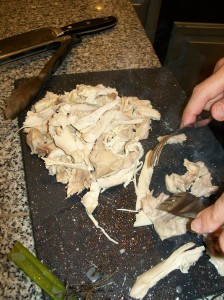 We put the small circle of dough in the bottom of the bowl, ladled the veloute sauce, veggies and chicken on top and K broke the “dough dome” into pieces to lay artfully on top of the pot pie. We garnished with a sprig of fresh thyme (the leaves of which we picked off and mixed in to great effect).

This was simply the best pot pie I’ve ever eaten. Ever. If I could have torn myself away for a moment, I probably would have jumped up and down just like Carla Hall did. As it was, I enjoyed the supple, crisp and oh so buttery crust that held up nicely to the buttery sauce. The veggies were still a bit crisp and had a fresh bite to them. The chicken was so very tender and perfectly seasoned. And, best of all, there was no skimping on the crust! There was still some leftover in the bowl to pick up the remaining drops of sauce.

Make this pot pie. You can even make it all ahead of time, freeze it, reheat the filling and make the crust in the oven for about 20 minutes. Pi Day is coming up on March 14 (3.14 you see …). You should make this butterific pot pie for that day. Or any other day. It will spoil you on any anemic frozen pot pie forever, but sometimes it’s oh so good to be spoiled.