By Lynne April 7, 2011 cooking Eat Top Chef All Stars Top Chef Night Wolfgang Puck
Could K and I cook a “last meal” for a famous chef? If that chef were Wolfgang Puck, yes, which is why we chose Richard Blais’ interpretation of Puck’s “last meal” request — Beef Goulash with Spaetzel and Apple Strudel with Tarragon. If that chef were Morimoto, no. I would run for the hills where I would hide until assured that the Iron Chef had left the area. He’s very intimidating.

What did not seem intimidating, however, was the recipe for goulash. We’d braised short ribs successfully many times and this was another opportunity to bust out the trusty crock pot. They had “Texas ribs” at the Wedge co-op but not short ribs, so I grabbed those figuring a rib is a rib whether short or long. Midday, I sprinkled the ribs with salt and pepper, dredged them in flour and browned them in some olive oil in a pan. I put them into the crock pot then browned some onions and carrots, added some paprika and caraway to the pan until lightly toasted then added a bit of tomato paste. I put the mixture into the crock pot, covered everything with chicken stock and let the magic happen.

K and I realized that Chad the Bravo intern was “hard at work” not paying attention to the food actually made on the show. The recipe title includes spaetzel, sour cream and tarragon in the strudel, but none of those things were in the actual recipe or instructions. So K used the “Grandma’s spaetzel” recipe of a co-worker (very basic flour, water, egg dough) and gave the spaetzel maker another shot.

The same thing happened this time as last time. The dough was far too sticky and didn’t fall through the little “cheese grater” holes into the boiling water. No matter what K used to try to shove the dough through, it got stuck. Finally he just made dough chunks with his fingers and dropped them into the pot.

While the spaetzle mess was happening, I was sautéing peeled apple slices in butter before adding raisins, five spice (in place of Ras al Hanout) and walnuts. When everything was browned, I deglazed the pan with cognac (in place of brandy) and let the mixture cool. Tarragon is in the recipe title, but doesn’t appear anywhere in the recipe, but I chopped about a tablespoon and added it into the mix as well. We purchased frozen phyllo dough and trying to pull apart each leaf proved next to impossible. I ended up grabbing about three “leaves” at a time, brushing them with melted butter and sprinkling them with sugar. When about 12 – 15 sheets were buttered, I put the apple mixture in the middle, rolled everything up, brushed with butter and sprinkled with sugar then put it into the oven at 325 for about 20 minutes.

The frustrating spaetzel finished, K made a gravy out of the braising liquid by reducing it in a pan with a slurry of flour and water. Then it was time to give Wolfgang’s last meal a taste. On the show, Blais made a powdered sour cream with liquid nitrogen. K doesn’t like sour cream so he skipped it and I just added a spoonful of regular sour cream to the side of my plate.

The spaetzel were beautiful and fluffy tender. While we’re probably never using the spaetzel maker again, these pillowy little dough balls would be great with gravy or light tomato sauce or just some butter and a sprinkle of cheese.  The chunks of rib meat were a tad chewier than a traditional short rib would have been, but it was still rich and delicious. The rye flavor added by the caraway was fantastic and I’d add even more caraway next time. The sour cream was a cool, acerbic foil to the rich dish. In the future, I’d also probably sprinkle some chopped Italian parsley on top for a little fresh greenery. But wow, this was like a warm hug from the inside. 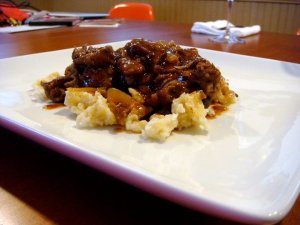 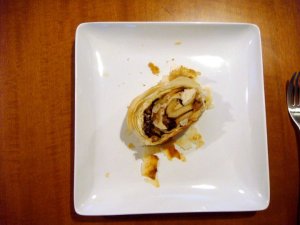 Was our first attempt at goulash, spaetzel and strudel good enough to impress Wolfgang Puck? Probably not, but we’re close! It was certainly tasty enough to warrant another try!

Alterations: Used “Texas ribs” instead of short ribs, used our own spaetzel recipe since none was provided, used five spice powder instead of ras al hanout and cognac instead of brandy in the strudel, added tarragon to the strudel.