Top Chef needs to come back on the air. Not the over-the-top, dramarific dessert version, the real food, real chefs cooking Top Chef. Why?
A) I can’t handle one more “Storage Wars” marathon on Wednesday nights.
B) I don’t want to run through the season 2 DVDs of “Modern Family” too quickly. I like to savor the hilarity.
C) It’s less fun to cook through our cookbooks and not be able to share the recipes with you.
D) We’re scrapin’ the bottom of the Top Chef recipes barrel. Case in point: Spicy Duck Meatballs by Top Chef season 1 winner Harold Dieterle (click here for recipe … actually, don’t).

Let me explain. It would appear that Dieterle went on NBC’s Today show and cooked his “signature dishes.” The recipe makes it look like it’s spicy duck meatballs with edamame falafel. I went shopping. I got all the ingredients. I looked over the recipe and thought about it then emailed K with a query — does it seem weird that duck meatballs and edamame falafel would go together? We agreed, it did seem weird. And it turns out they do not go together. They are two separate recipes meant to be made separately. Okay, our fault for not paying closer attention. We ditched the falafel and decided to make fresh linguine to go with our duck meatballs. Flour, an egg and a splash of water are all it takes to make pasta so we had the ingredients on hand. You do too and you should make fresh pasta with this easy Mario Batali recipe (click here for recipe). You can do it, trust me.

While I kneaded, rolled out and cut pasta dough, K got started on the duck meatballs. Except the recipe doesn’t make a whole lot of sense.It doesn’t tell you what goes into the meatballs, it just tells you how to cook them. Sort of. There are pieces missing everywhere and steps seem out of order and repeated.

So we went back to basics. We couldn’t find ground duck, so I’d picked up duck breasts at the co-op then minced the meat in our little 3-cup food processor (really a food chopper). K put chopped onions, garlic, basil, sriracha, panko breadcrumbs and an egg in with the ground duck and made the meatballs. He put them in the oven, but then we saw that they’d need to simmer post-oven for an *additional* 30 minutes after the stock had simmered for 20 minutes. Hungry and getting crabby because of the effed up recipe, we left the meatballs in the oven to move things along. 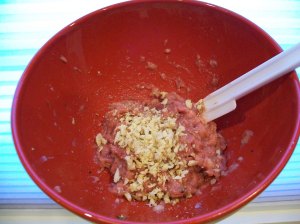 K sautéed some shallots in a saucepan then added tomatoes, white wine, thyme and mushroom stock and started boiling furiously. After the stock had simmered, he put the meatballs in to add some moisture, noting that there was little fat in the duck and they’d probably be dry. As a side note: I took the skin off the duck breast and we made duck chicharrones (fried fatty duck skin) as an appetizer. I popped the fresh pasta into bubbling water and K furiously tried to reduce the sauce which he thickened with a little cornstarch dissolved in water. The pasta done and the sauce slightly thickened, and with us starving and ready to let guinea pigs use the flippin’ meatballs as tiny soccer balls — we plated everything up and got down to it.

The fresh pasta was lovely and light and springy. The sauce was a little thin, but flavorful in a meaty Sunday supper kind of way. The duck meatballs were tasty, with a little bit of spice, but had definitely dried out during their time in the oven and were a bit rough. The pan-fried duck skin cracklings, on the other hand, were salty, crispy, fat melty delicious. A stroke of genius in an otherwise average dinner, but we did the best we could with a sub-par recipe. I think we’re going to have to start being our own Top Chefs!

Alterations: We ground our own duck using duck breasts, we used mushroom stock instead of veal stock, we made linguine as an accompaniment and basically didn’t follow the ridiculous recipe.
Soundtrack: British band Idlewild.
Would we make this again: No. Confusing, time-consuming and just generally not worth it.