You know that feeling when you’re reading a recipe or making a dish and something seems … off? You feel like there’s not enough of something, or maybe too much, or even that something is missing. But you soldier on because, hey … it’s in a book or this is how the dish has always been made. We all need to trust our cooking instincts, no matter what someone else (or some recipe) says. This is why:

It was the premiere of Top Chef season nine. We were excited. We’ve missed the show and the challenge of recreating the dishes the contestants come up with. I am signed up with Klout and they have a perk program. If you don’t know what this is, don’t worry. It’s a pretty pointless “influence” algorithm for social networks. This week Klout told me I’m “influential about cats.” We neither have nor discuss cats. Klout is wrong. But, I digress. As pointless as it is, Klout sent us a lovely free Top Chef package to promote the new season (thanks Klout!). It included the “How to Cook Like a Top Chef” cookbook with some fun recipes. So, for the debut of the new Top Chef season, we decided to cook like chef Ashley Merriman from season six and make truffled gnocchi.

Gnocchi is a dish I’ve made countless times. I know what it’s supposed to look like, I know it’s ready to throw in boiling water by the way it feels in my hands. Gnocchi is simply mashed (or riced) potatoes, eggs and flour made into little dumplings of wonderful. They’re great simply boiled in water for about three minutes and they’re even better when you saute them in butter. This recipe for gnocchi called for potatoes, egg yolks and a teensy bit of flour for dusting. I mentioned to K that the recipe seemed wrong, there wasn’t enough flour. But I soldiered ahead because, hey…it’s written in a book and the good recipe testers at Bravo Media wouldn’t put out a recipe that was wrong, right?

WRONG. When you bake potatoes, put them through a ricer, add egg yolks and try to form them into a dough with just a dusting of flour you get this: 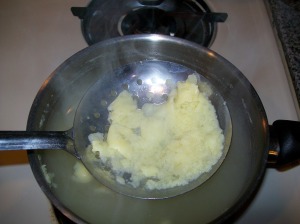 Yes, that is a disgusting pot of hot, mushy potato water. It tastes like water, but with a smack of mushy potato. This is what happened with about 1/3 of the gnocchi dumplings before I freaked the hell out. Immediately, I got out the flour container, smashed all the remaining “gnocchi” back into wet potato form and started adding flour until they actually formed appropriately firm little potato dumplings. I realized I should have trusted my cooking instincts. There was not, in fact, nearly enough flour in the recipe.

While all this was happening (and I was cursing the recipe under my breath), K was blanching arugula and combining it with melted butter and a little heavy cream. He was also sautéing shallots, garlic, thyme and mushrooms with a little truffle oil. We boiled a new pot of water, popped the revamped gnocchi into the bubbling pot and soon they rose to the surface. They were tossed with the truffled mushrooms and the arugula cream sauce was poured on top. Chunks of ricotta cheese were sprinkled and dinner was served.

It was so much better than hot, mushy potato water. The gnocchi was springy and firm with fresh potato taste. The mushrooms and truffle oil were meaty and substantial and funky and the arugula cream sauce was smooth and green with just the slightest, peppery bite. The ricotta was cool and milky. We both could have enjoyed more, if only I’d trusted my cooking instincts and hadn’t lost so many. But we were satisfied that we saved the gnocchi in time to enjoy a killer new season of Top Chef.

So, the next time your instincts tell you that there’s not enough flour or there’s too much lemon or that a recipe is missing chicken stock — listen to your inner chef. S/he wants you to have a delicious dinner. Don’t fight that feeling. 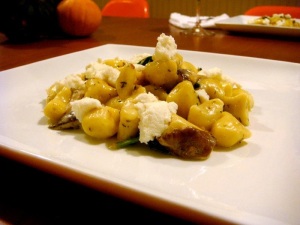 Alterations: Let’s just put it this way, if you’ve got “How to Cook Like a Top Chef,” don’t bother with the gnocchi recipe on page 37. Use a recipe from your favorite Italian chef and just go with the truffled mushrooms and arugula cream sauce in the book.
Soundtrack: A techno mix put together by K. Most of our interesting music choices come from him. He highlights some favorites on his music blog: http://whatisplayinginmyitunes.wordpress.com/  Check it out.
Would we make this again: We will make MY version of gnocchi and add truffled mushrooms and arugula cream.