Flashback: Many years ago I was visiting Gothenburg, Sweden (home of Volvo) and a pizza was ordered. This was no ordinary pizza. It was a peculiar regional specialty — the Kebab Pizza. Kebab pizza is a hybrid of the best of everything a pizza has to offer PLUS kebab meat, spices and sauce. This may not seem like it goes together, but does it ever! Every once and awhile I think back to the deliciousness and wonder if it could be recreated.

Flash forward to a recent MN Food Bloggers event featuring the lovely Zoe Francois, co-author of “Artisan Pizza and Flatbread in Five Minutes a Day.” It was a pizza party at Kitchen in the Market and Zoe brought the dough, a copy of her book, some bread flour and yeast. We had a blast and made the most delicious pizzas. Though neither of us was gutsy enough to toss the dough into the air, we did dimple and stretch until we had the perfect pies. We also won a really nice pizza stone, something we didn’t have in our kitchen (believe it or not).

Armed with the ingredients, the recipe in Zoe’s book and a hankering for kebab pizza, we set off to recreate this Scandinavian treat. Early in the day, I made half the recipe for bread flour pizza dough (you’ll have to get the Artisan Pizza book for the recipe — trust me, it’s worth it). When K got home, he stuck the pizza stone into the oven set at 500 degrees. Make note of this, it’s foreshadowing for the rest of this tale.

Heat olive oil over medium heat, add garlic and saute for one minute. Add crushed tomatoes,  tomato paste, anchovies (or anchovy paste) pepper (or paprika) and oregano. Let simmer until tomatoes are falling apart (about 10-15 minutes). Remove from heat and set aside.

It was hot in the kitchen. Very hot. I was also working to get rid of the flu and still had a fever, which made it even more hot. I pulled a portion of dough from our dough pile and K wrapped and froze the other two portions. I attempted to dimple and flatten and stretch and make into a circle, but the damn thing just kept springing back in on itself. Then it would rip. After a few frustrating tries, my internal *and* external temperatures at a boiling point, I said, “Screw it. We’ll just have an unevenly shaped pizza.” Sensing my escalating anger, K agreed and we started topping our kebab pizza.

Slice the onion and saute in a bit of olive oil until soft and golden brown. Spread sauce on pizza dough, add onions, sprinkle cheese evenly over pizza, add oregano, basil and meat. 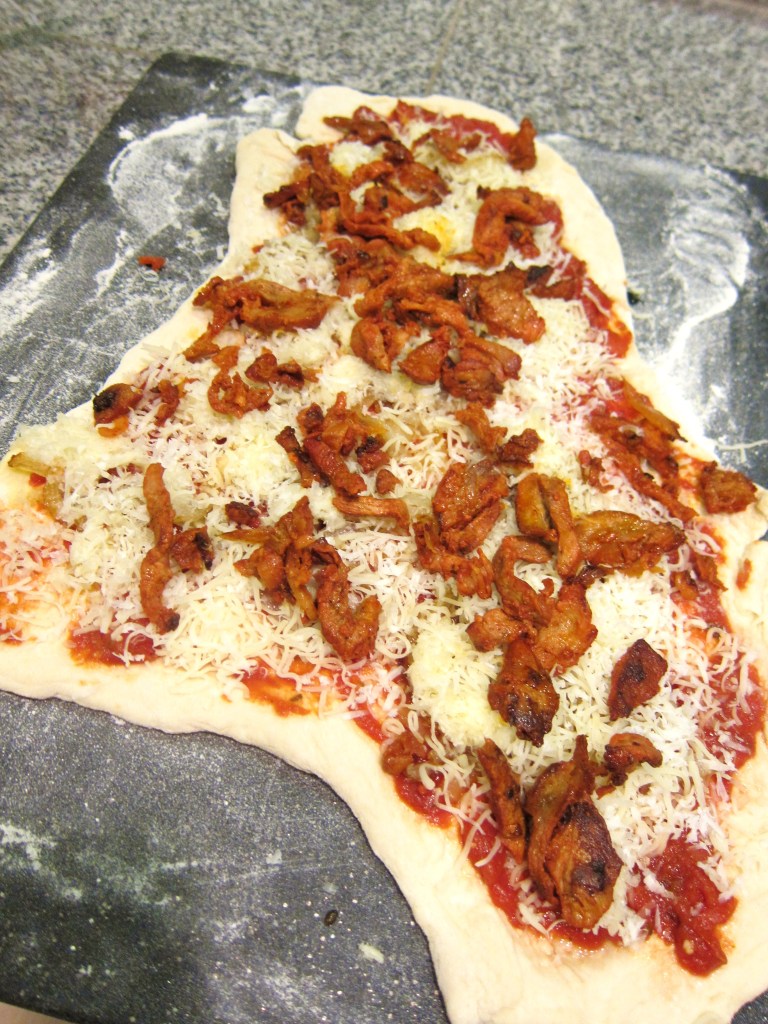 It was at this point we realized we had no way to get the pizza from the cutting board onto the extremely hot pizza stone. Numerous attempts were made to transfer the pizza and most just resulted in the dough falling apart or the toppings falling off. No matter what we put under the pizza, it stuck because it was so damn hot in the kitchen that every ingredient was melting (including the cheese before it even got to the oven). Two sweltering, angry and hungry people stared at what was supposed to be dinner and a decision was made. Hack it in half, fold it over on itself and toss it onto the pizza stone. We’d be having Kebab Calzones.

And, as you can see, they were ugly. But looks kind of stop mattering when you’re so hungry you could eat your own arm.

While the calzones were baking, I made the kebab sauce.

Mix all sauce ingredients together and set aside.

It only took about 10 minutes for the calzones to cook through and the crusts to become golden. We let them cool and used the kebab sauce to dip and, ugly as they were, they were also really tasty!

The crust was crisp and chewy, the flavors had a Middle Eastern hint, the meat was a phenomenally different touch and the sauce was tangy and cool. Not an exact match for that unusual pizza I remembered, but pretty close. Later, via Twitter, Zoe (and our friend Jen) recommended that in the future we use an upside down cookie sheet (or one without sides) in lieu of a pizza peel to transfer our pie to the baking stone. We’ll certainly give that a try, but if I have to endure an ugly, but delicious calzone in the pursuit of pizza perfection, I’m willing to take that one for the team.

6 thoughts on “Kebab Pizza (or Calzones)”