Chef Sue Zemanick got nailed for this dish on Top Chef Masters because she put delicate lobster into a crusty, bready baguette, so we decided to remedy that with our twist on her Asian lobster roll with spicy yuzu aioli and pickled carrots with taro chips (original recipe here).

I got a beautiful haul of multicolored carrots from the farmers market and did a carrot quick pickle in my favorite bowl (from local pottery artist Sue Schweitzer, a former co-worker of mine and an all around awesome chick). 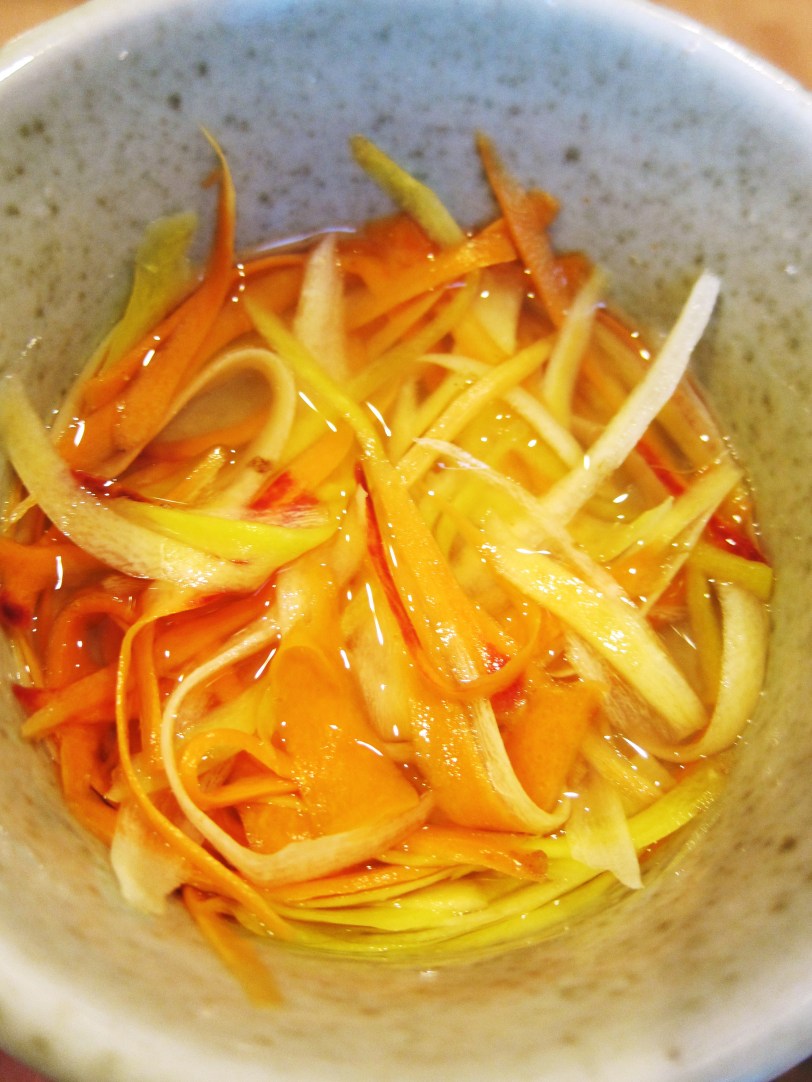 The original recipe calls for making from-scratch aioli and we always end up with too much when we do that. Also, I was feeling pretty lazy, so I used pre-made organic mayo and flavored it up with citrus. I looked everywhere for yuzu or yuzu juice, but couldn’t find it, so we subbed out grapefruit juice to great effect.

Also in the original recipe were taro chips, but we love, love, LOVE the yucca fries at Brasa, so we decided to swap root vegetables and try our hand at yucca fries. I picked up a fresh yucca root and K peeled the thickly waxed skin. As soon as the skin was off the root, there was a distinct “old basement smell” emanating from it. We boiled the yucca in salted water until it was tender and it still smelled. Then we fried the yucca in canola oil and salted it. It was better, but there was still that hint of old, moldy basement.

I asked Brasa via Twitter what the deal was and they said they’ve had a lot of issues with the fresh yucca they’ve found in the Minneapolis St. Paul area and that, in the future, frozen yucca would be a good way to go. Our blanched yucca…

…they looked better than they smelled.

We had two lobster tails and used our sous vide machine to cook them, but steaming them quickly is another very good way to cook them without overcooking them so they seize up and get rubbery. We chopped the lobster meat, let it cool and mixed it with our citrus aioli. We crunched up the shells  and toasted them in a small saucepan, added a good chunk of butter, some ginger, garlic and cilantro stems and made the lobster-infused butter.

We brushed the butter on two pieces of naan and toasted just one side in a hot pan to use for our “roll.” And when all was said and done, we enjoyed this for dinner: 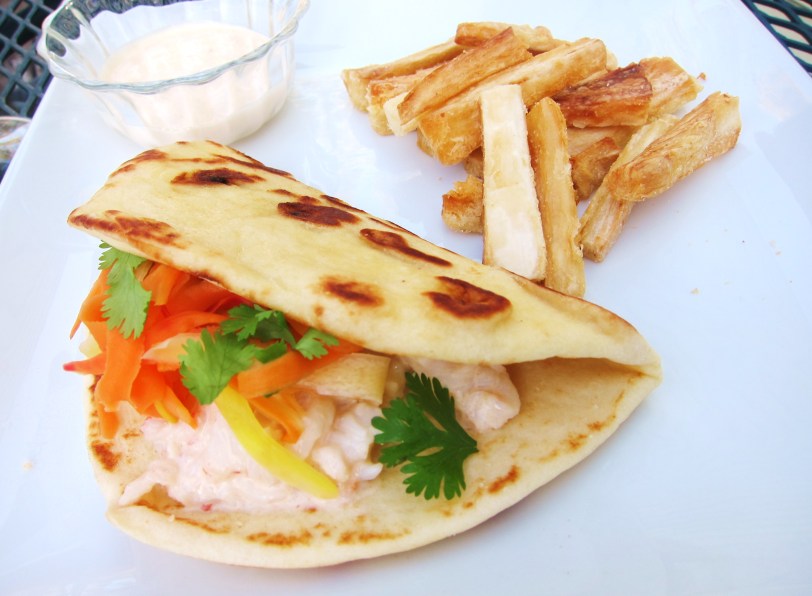 As I mentioned, the yucca fries had that basement-y hint, but they were still nice and crispy with tender middles and the tasty citrus aioli as a dipping sauce helped. The sweet lobster meat was also nicely complemented by the aioli and not at all overpowered. The pickled carrots and fresh cilantro added a fresh, tart and cool crunch. The naan was the perfect amount of bread. This is a great spin on a lobster roll and we’d certainly make it again. As far as the yucca fries, we’ll just get them from Brasa because they kick ass.

Here’s how we did it:

1 fresh yucca root (if you trust your source) or 3 cups frozen yucca, cut into “fries”
salt, to taste
canola oil for frying

Carrot pickles: Make your carrot quick pickles by thinly peeling carrots. Mix the brown sugar and rice vinegar and add water to taste — the brine should be tart, but not overpowering. Set pickles aside for sandwich assembly.

Lobster butter: Use a kitchen scissors to cut the shell off the uncooked lobster tail. Use a fork, your fingers, clean tweezers … whatever you need to use to get every piece of lobster meat out of that shell. Once it’s picked clean, crunch it up into large pieces with a heavy utensil (spoon or meat mallet). Put it into a small-medium-sized saucepan and toast the shell over medium heat. When shell begins to turn red, add the ginger, garlic, butter and cilantro stems. Let everything just come to a boil then turn off the heat and leave the butter to sit and steep. When you’re ready to serve, strain the lobster butter through a fine sieve and brush naan with butter.

Yucca fries: Boil a pot of salted water and blanch yucca until just fork tender (thawing frozen yucca before boiling is optional, but boiling frozen yucca will take longer. Make sure middle is no longer frozen.) Using a medium-sized pot, add enough canola oil to cover yucca while frying. Heat oil over medium heat until it bubbles and sizzles when a piece of yucca is dropped in. When oil is up to temperature, drop in yucca fries until they’re light golden brown. Remove to a paper towel to drain and salt liberally to taste.

Citrus aioli: Mix garlic and ginger into mayo. Mix in citrus juice gradually, tasting as you go to make sure there’s a good balance between the rich mayo and the tart citrus. Add salt to taste.

Lobster: If you’re using a sous vide machine, vacuum seal lobster (out of the shell) into a bag with 1 TB melted butter and chopped cilantro. Poach the lobster at 140 degrees F for 20 minutes. Remove, let cool and chop before tossing in just enough aioli to coat.

If you’re steaming the lobster: Place about 1 inch of water into a pan, add a steamer insert. Bring water to a boil and place lobster (out of the shell) into the steamer insert. Cover and let steam for 5 minutes. Check to see if lobster is just barely cooked through. If it needs more time, let it steam up to three additional minutes. Remove, let cool and chop before tossing in just enough aioli to coat.

Assembly: Brush one side of naan with lobster butter and place naan, butter side down, into a hot pan. Let naan heat through and get just the slightest crisp on the buttered side. Toss lobster in just enough aioli to coat, reserve extra aioli as a dipping sauce. Spoon lobster mixture onto one side of naan. Grab about 1/4 cup of carrot pickles and squeeze out additional pickling liquid then place on top of lobster mixture. Garnish with fresh cilantro leaves.

Make sure yucca fries are hot and properly salted and you’re ready to eat! And though it seems like there are a lot of steps, this really does only take about 30 minutes to make. And it’s deliciously worth it, especially when enjoyed with a nice glass of rose on your deck on a lovely summer evening.

UPDATE: After Tweeting the link, Chef Sue Zemanick tweeted back that she’s going to give our version of her recipe a try! How cool is that?!?